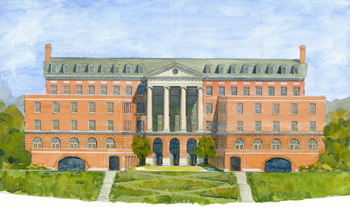 Samford University's Brock School of Business today (April 26) announced the launch of a campaign to build a new state-of-the-art business school on Samford's campus.  The announcement came early this morning at the Samford Business Network Breakfast and Meeting at the Harbert Center downtown.

During the event, Birmingham insurance executive Gary Cooney, a 1974 Samford graduate, publicly announced his pledge to give the Brock School of Business at least $12.5 million to help grow business education programs at Samford. Cooney is vice chairman of McGriff, Seibels and Williams, Inc.

University officials said the gift, which Cooney said is "irrevocable," would be a catalyst that allows Samford to begin construction of the new building.

Cooney said he wanted the building to become a reality as a soon as possible to honor the business school's namesake, retired Birmingham banker and Samford trustee Harry B. Brock Jr.

Standing next to Brock, Cooney said, "I don't want to see us pass this opportunity and not allow him to see that building finished. I want him to be the guy that gets to cut the ribbon when it is finished. That is what I want to see."

Cooney said that two of the best investments he had ever made were in his company and in Samford University. "This state needs what Samford is about to do. We offer something at Samford that is difficult to find anywhere else in the world," Cooney said. "This city and this university have the chance to add a crown jewel that will attract businesses and will attract students."

Also on hand for the announcement were Samford President Andrew Westmoreland, local business leaders, and students and faculty of the Brock School of Business.

Westmoreland expressed appreciation to Cooney for his pledge and his involvement in Samford.

"I want you to know the depth of my appreciation to you on behalf of everyone at Samford University," Westmoreland said. "We love you and are grateful beyond measure to you, and you are surrounded by folks in this room who are grateful."

Westmoreland called the building a "new beginning" for Samford and the business school.

"My favorite thing about a university is that it is a place of beginnings," Westmoreland said.  "[The faculty] have pledged their lives to this place because they want to assist with those beginnings. Every single day it is about beginnings. This will allow us more new beginnings."

The new building will be located to the north of Harwell G. Davis Library and to the east of Mamie Mell Smith Residence Hall. It will include a community resource forum that can hold up to 400 people, classrooms with interactive breakout rooms, the student business incubator and the Bulldog Investment Fund room.

"This is a transformational opportunity to invest in our current students, and in future students for generations to come, so that they receive the highest quality business education," said Howard Finch, dean of the Brock School of Business.

One of the more prolific moments of the announcement came from a videotaped message from Brock, for whom the business school was named in 2007.  In his message he told what a new building would mean to him and his family and the legacy he is leaving for the future.

"It goes without saying that the new building would be a big boost for our faculty and would help attract students," Brock said. "Any time you have something this beautiful and nice, it helps the general community. Brick and mortar is where it starts. It's a winner in almost every respect."

The project is part of the university's multi-year, multi-million dollar "Campaign for Samford." The campaign already has received more than $158 million in gifts and pledges.