Samford Dedicates Its Newest Monument to 'Learning and Friendship' 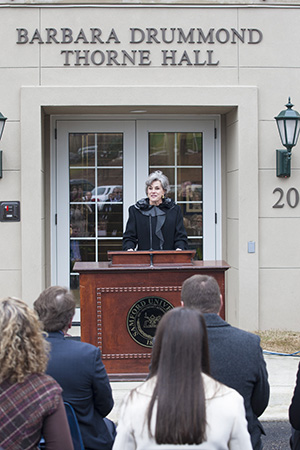 Calling all residence halls a kind of monument to life, learning and friendship, Samford president Dr. Andrew Westmoreland noted that the new building is "also a memorial to a wonderful friend of Samford."

The late Mrs. Thorne, who was from Jasper Ala., was a member of the Samford Board of Trustees from 2001 until her death in 2009.

Westmoreland described each building at Samford as being beautiful and a particular kind of monument or memorial.

Academic buildings, he said, are monuments to teaching and learning, as are libraries to acquired knowledge, laboratories and performance halls to inquiry and creativity, and athletic fields and gymnasia to physical strength and competition. And, chapels are monuments that turn hearts toward a loving God and a living Savior.  But what of residence halls?

"Surely they are more than a shelter from the elements and a place to hang our clothes," said Westmoreland, adding that while thousands of students will spend only a short time in Thorne Hall, they will forever remember their time in this "home away from home."

"Think of the strangers who will meet here and become lifelong friends. Think of the food and the coffee and midnight conversations about God, human nature and the nature of the universe, free will and predestination, politics and poetry," said Westmoreland.

Thorne Hall, he said "is a perfect reflection of Barbara's concern for students and her work on the trustee committees on student life and university advancement."

Thorne's daughter, Beth Stukes of Jasper, a current member of the Samford Board of Trustees, gave the family's response on behalf of her siblings: Larry Thorne and Becky Thorne Carroll, both of Auburn, Ala.; and Babs Thorne Anderson of Tuscaloosa, Ala.

"We are grateful for the many relationships she had at Samford," Stukes said of her mother, whose life, she said "exemplified the core values of Samford.  This is a fitting tribute."

Thorne Hall has about 34,600 square feet and can house up to 100 students in apartment-style living quarters. Each apartment has four private, single-person bedrooms, two bedrooms and a common living/kitchen area.  One wing of the building is designated for men and the other wing for women.

The first new residence facility to open on the Samford campus since the early 1990s, it is part of a residential complex called West Village that eventually will include five buildings.  Two other buildings are under construction and will open for the fall 2013 semester.

Construction of Thorne Hall was made possible in part by a generous bequest from the Barbara Drummond Thorne estate. In appreciation of Thorne's service and generosity, the Samford Board of Trustees voted in 2012 to give her name to the first building completed in the West Village project.

Many Thorne family members and other guests enjoyed touring the new building, which welcomed its first residents just two weeks ago when students arrived for spring semester.

Suitemates Doug Lyons and Ryan Brooksbank were on hand to greet visitors to their third-floor apartment. They were previously roommates in another residence hall.

Brooksbank, a senior exercise science major from Lenoir City, Tenn., likes that the layout offers more quiet for studying in his own room. "I can focus on my studies much better," he said.

Lyons, a senior biology major from Chelsea, noted that the building is situated farther from passing traffic than some residence halls, and is more accessible to the sidewalk and parking.

They enjoy having a small kitchen, which they have used to cook for their girlfriends.  "Mostly things like cookies," said Lyons.