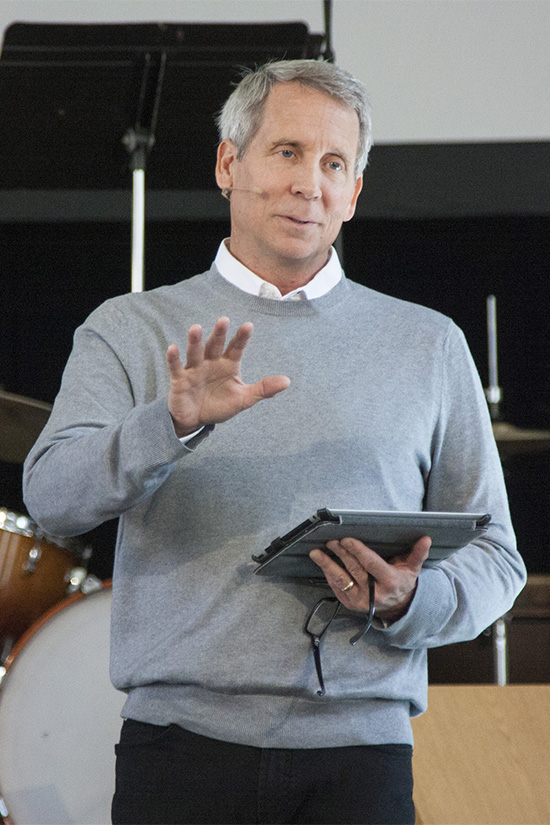 Samford University students were urged to take the gospel to all nations and learned ways to do it, including by using a smartphone, during a Go Global missions emphasis at the school October 8-10.

"Be a generation known for its passionate pursuit of a loving God and for taking the news to the ends of the earth," guest speaker Jeff Lewis said at a convocation on Tuesday, Oct. 8.

Lewis confessed to the student audience that his generation of baby boomers had taught them many wrong things about leading a Christian life:  one being that missions is only for the called.

"In fact, a follower of Jesus Christ has already been called.  You are to engage the world every day and live as sent agents of the Lord," Lewis said.

As Samford students develop skill sets in nursing, business and other academic areas, they are also learning skills to engage the nations, and they need to use that knowledge, said Lewis, professor of intercultural studies and director of the Global Center at California Baptist University in Riverside, Calif.

The veteran global activist also said that guilt is too often unwisely used as the primary motivation for serving God. "Guilt is never sustainable," he cautioned.

Speaking on similar themes at a Beeson divinity school Go Global worship service, Lewis said that he and others who came to Christ through the Jesus Movement erroneously thought getting to know God meant withdrawing from the world.

"I hope you understand that whatever you do locally is part of the Lord's global work.  True knowledge of God is revealed in global engagement from Birmingham to the ends of the earth," said Lewis, author of God's Heart for the Nations.

John Prater, with Gospelink ministry, urged support of national pastors--those who are native to the nations where they minister.

Traditionally, people think of missionaries going from North America to other nations, but in reality, missionaries from other nations are doing that, as well, said Prater, a Samford graduate and former church pastor.  "It's not just a one-way street."

As recently as 40 years ago, missions meant adopting the North American model, but that has changed as more leaders, the type of music used in services, and other aspects of ministry are indigenous to local culture. In Tanzania, for example, a mission effort begun by Southern Baptist missionaries is now completely run by nationals.

One major trend in world missions is the restriction of western missionaries in nations such as China and India, where American missionaries are not allowed.  Another is that traditional "receiving nations" are becoming "sending nations," as evidenced by Brazilians to North America and Angola, Koreans to east Africa, and Africans to Europe.

Statistics about the number of women and children affected by sex trafficking worldwide, she said, range from 600,000 to 3 million.  "That's too many people, whatever the number," Barringer said.

Global Women partners with organizations such as Beginning of Life, which rescues women from human trafficking.

Barringer described a recent trip to Moldova, where Beginning of Life sponsors a camp so victims of sex trafficking can engage in Bible studies and recreation, and heal in mind, body and spirit. Her Global Women team assisted in ways such as helping with arts and crafts and babysitting while the women were in Bible study.  "One woman experienced grace from someone, and in turn came to know Christ herself," she said.

Workshop speaker Ken Wienecke warned his audience that he would talk some "geek speak," but not to worry if they didn't follow every word in his session on "The Great Commission Goes Mobile."

Some 2,000 years after the New Testament parable of the sower casting seed, the goal is the same, but with all kinds of equipment to plant the seed, or the message of God, Wienecke said. From the first printing press that allowed mass production of the Bible in the 15th century, through the early radio preachers in the 1920s, technology such as Facebook and websites now provide the latest tools for evangelism.

"We need to use technology, not run from it," said Wienecke.  "We must think differently now, especially if we want to get the message in front of people in restricted areas where it may be dangerous to be seen looking at Christian material, even on a computer."

He showed his audience of about 30, many of them math and computer science students, how to call up a Jesus film on their smartphones. Since the process doesn't involve the Internet, he said, the students  could be under on a tree on a remote desert, taking a theological education course, and be completely safe.

There are more mobile devices in the world today than the 7 billion people that live in it, said Wienecke, a project manager with OneHundredFold, which leverages emerging technology and provides training in existing tools to help fulfill the great commission.

Some nations with heavy illiteracy rates rely more on "dumb phones" than on smartphones, which require that the user be able to read, said Wienecke.

Meredith Robinson, who is taking a computer science course, said she was happy and surprised that she understood most of the technology Wienecke described, such as web design, training and telephone servers.

The workshop, said the math major from Jacksonville, Fla., reflects her favorite part of Go Global week: "Exploring the diverse avenues through which creative people have decided to use their passions, interests and talents on the mission field, and are now inviting others to join them."

Go Global week also included other programs and opportunities for students to meet with mission agency representatives, and an exhibition with displays by 32 organizations.