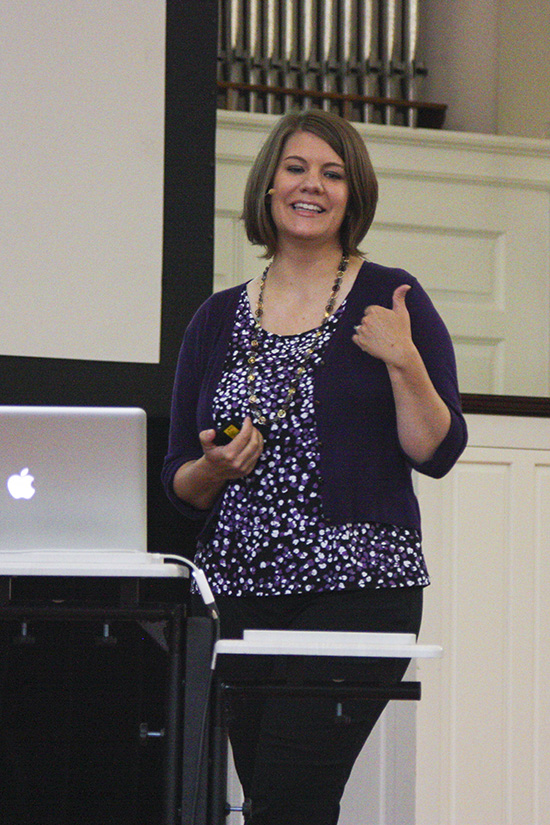 In addition to her prominent online presence, Evans is author of Evolving in Monkeytown and A Year of Biblical Womanhood, chronicling her attempt to live the letter of Biblical instructions to women. She spoke about the latter project at Samford in a morning convocation program.

Evans was intrigued by the popular “Biblical woman” movement that arose in response to second wave feminism, and noticed how selectively the movement’s advocates used scripture. She recalled that, according to scripture, a woman must marry her rapist and can be sold to retire a man’s debt. But Evans took up the challenge and for a year adhered to the most literal interpretation of scriptural instruction–covering her head during prayer, living apart from men during her period, sitting on the roof as penance for being “contentious” and generally adopting the submissive domestic role often endorsed as Biblical. There was a significant flaw in her plan.

Evans, like many other Christians, looked to Proverbs 31 for guidance on how a women should live, but overlooked its true import until an orthodox Jewish friend changed her perspective on the verse. In her friend’s culture, Evans said, the verse is not a to-do list for women to memorize, but a verse of unconditional praise memorized by men and sung to the women in their lives. In Hebrew, the high-status woman of the verse is described as Eschet chayal, “woman of valor.” Evans noted that the same term is used to describe Ruth, the poor, foreign-born, childless widow. These women and other heroines of the Bible are radically different apart from their courage and great faith, Evans said.

Evans observed that advocates of Biblical womanhood often claim to have a “blueprint” for achieving that life. “But God didn’t give us a blueprint,” she said. “I think it’s because God wants us to live our life with valor and with faith no matter our circumstances, no matter our gifts, no matter our gender or station in life.”

So how, at the end of her Biblical year, did Evans define what it means to be a Biblical woman? “Jesus said, love the lord with all your heart, soul, mind and strength, and love your neighbor as yourself,” she said. “If that’s Jesus’ definition of ‘Biblical,’ perhaps is should be ours.”

Samford’s Dotson McGinnis Nelson, Junior Lectureship in Religion and Life was established in 1984 by Martha Holley and Howard Lamar Holley. The lectures were endowed to serve Samford University by helping meet the need for Samford students to grow in their intellectual and spiritual understanding of Christianity and its application to society. This purpose is met by having outstanding lecturers who are recognized both for scholarship and churchmanship.