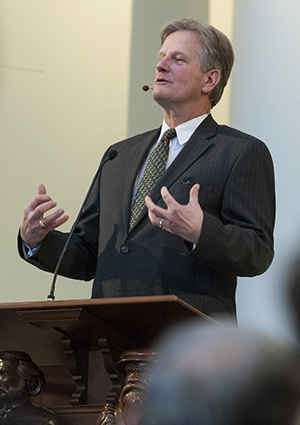 Students and guests attending the William E. Conger, Jr. Lectures on Biblical Preaching at the Beeson School of Divinity were told that the Bible is full of paradoxes and that people would rather hear a story than a sermon.

The Rev. Mark Jeske, pastor of St. Marcus Lutheran Church in Milwaukee, Wisc., based his lectures on Colossians 1:29, the theme "Struggling with All His Energy" and his experiences as a pastor and televangelist.  He suggested that people are more interested in how their lives are impacted by the Word of God than the technique used to teach or tell them about God and the Bible.

In his first lecture titled "The Orthodoxy of Paradoxy," Jeske (right) said that life is filled with paradoxes. He mentioned light, which some define as particles and other as waves, as an example. Yet, when it comes to the Bible, which he said was full of paradoxes, we tend to explain them as either rather than accept them as both.

Some of the paradoxes in the Bible and the Christian faith he elaborated on were Law and Gospel, Grace and Faith, the Christian life--greatness versus washing feet, sinner and saint, death to life and enemy to friend.

"Leave them be," he said, suggesting that the "blessed paradox" is that "our job is to proclaim it, not to explain it."  He urged his audience to "refresh your desire to give it your all."

In his second lecture, titled "I Hate Preaching" (Can we Just Talk?)," Jeske, a graduate of Northwestern College and Wisconsin Lutheran Seminary, gave eight pointers to effective preaching, saying that the popular idea is that preaching is done by the few who are better dressed and stand up front, which is denied lay people.

"Talk but don't preach," he said, adding that sermons are usually negative and too long. He shared how his son had told his teacher at school that his father was a drug dealer. When pressed for a reason, the son answered: "I didn't want to tell them you were a televangelist."  Since November of 2001, Jeske, who started telecasting with only one station, now has 50 stations, numerous cable networks and the Internet.

Among the pointers he gave his audience was to write out a manuscript but "get it (sermon) in your heart" rather than on paper, invest heavily in the importance of the sermon, take a "chunk of scripture and drill into it," and be mindful of guests in attendance.

He warned against "the dreadful temptation" to allow doctrine to be the main focus of the sermon, and urged a thorough knowledge of the sermon's subject matter and to look at the members of the congregation while speaking.  If one does that, Jeske suggested, the ability to improvise and be spontaneous will be enhanced. "Adjust on the fly," he urged.

"Start where the people are," he said. "Go from the known to the unknown," adding that most people would rather you tell them a story than preach a sermon.

Pastor Jeske and his wife, Carol, an elementary school teacher, have four children. He has been pastor of St. Marcus Lutheran church, an inner-city church, since 1980. Today, the church is a multicultural congregation of more than 1,000 members.

The Conger Lectures on Bible Preaching are made possible by William E. Conger, Jr., a longtime friend of Samford University benefactor Ralph Waldo Beeson with a deep commitment to the pastoral ministry of preaching.