"An Evening with C. S. Lewis," the one-man play created and performed by actor David Payne will be presented April 1 as part of the Leslie S. Wright Fine Arts Center's "Signature Series" at Samford University. The 7:30 p.m. performance will be on the Wright Center stage. 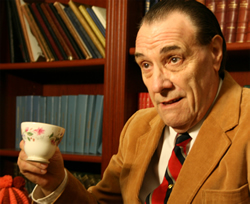 Tickets range from $20-$30. Student tickets are $10. Samford students, faculty, and staff are entitled to one complimentary ticket a piece, and Samford Convocation credit is available for this event.

Tickets are available online or by calling the Samford Arts box office at 205-726-2853. Regular box office hours are 9 a.m. to 5 p.m. Monday through Friday.

According to Payne, the scene of the show ". . . is 1963, and C. S. Lewis, the famous British author, is hosting a group of American writers at his home near Oxford. They are about to be treated to this his compellingly powerful oratory and the engaging warmth of his humor. Lewis is one of the most influential thinkers of the day, and here he recalls the people and events that served to inspire his thought and shape his life."

Sean Wright, director of the Wright Center, said he is very excited to be able to present this one-of-a- kind-play.

"'An Evening with C. S. Lewis' has proven to be a very popular show for audiences the world over," Wright said. "Mr. Payne has succeeded in bringing this beloved author to life in a way that venerates his work while humanizing the man. I know that Birmingham is going to enjoy this glimpse at a man whose work we've all enjoyed but know so little."

Payne, who bears an uncanny resemblance to C. S. Lewis, has long found his career entangled with the celebrated author. His first stage performance featured him portraying Lewis in the biographical play "Shadowlands" at the Tennessee Performing Arts Center in Nashville. He has written and developed three separate plays dealing with the life of Lewis, performing these works around the world. In addition, he has written a new play based on the life of the Apostle Paul called "Prisoner of Passion."

Clive Staples (C. S.) Lewis was a British writer, academic and radio personality. He is best known for his fictional works "The Screwtape Letters," "The Space Trilogy," and the seven volume "Chronicles of Narnia." He also wrote several non-fiction works on Christianity and his faith, including the apologetic "Mere Christianity," "Miracles," and "The Problem of Pain." While he worked at both Oxford and Cambridge, he is best remembered as a member of the Oxford literary group the "Inklings" along with his contemporary and friend J.R.R. Tolkien.

This performance is made possible through the support of the National Endowment for the Arts, South Arts and the Alabama State Council on the Arts.  More information on the entire Signature Series, including upcoming performances with David Dorfman Dance, as well as all other events held at the Wright Center, can be found online.