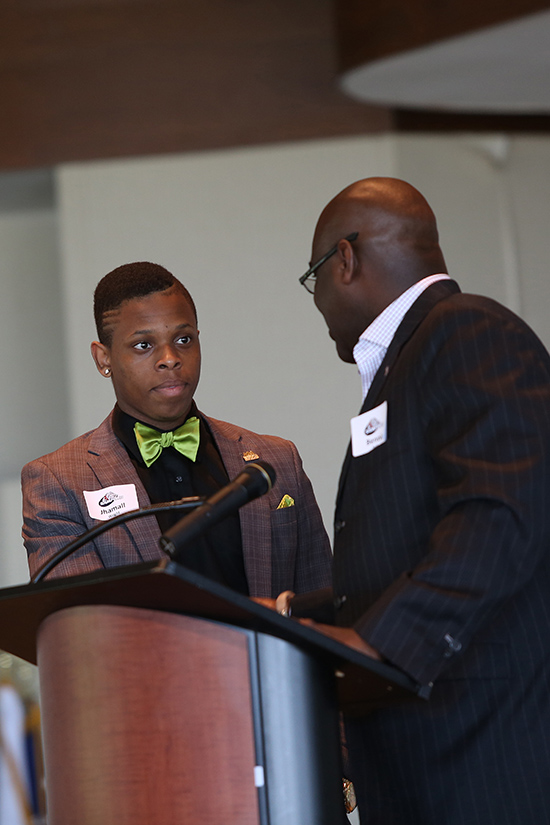 Before those presentations, however, two stunned students were tapped to receive $1,000 each to help with college expenses.

Joshua Washington, a freshman from Meridianville, Ala., received this year's Tiffany Conaway memorial scholarship presented by the Samford chapter of Delta Sigma Theta sorority. The scholarship honors Conaway, who championed diversity at Samford but died the spring of her senior year in 1995. Recipients are chosen on the basis of academic achievement, community service and an essay on how to enhance diversity at Samford.

A sports medicine major who finished his first semester with a perfect 4.0 grade point average, Washington is a member of Freshman Forum and other campus groups.

Jhamall Wright, a sophomore from Nashville, Tenn., responded at the right moment to receive $1,000 for book money from Samford head men's basketball coach Bennie Seltzer. The coach told how he attended college on a basketball scholarship but had a friend who enjoyed no such academic assistance.

"He kept borrowing my books, and I learned that it was because he could not afford them," recalled Seltzer, who asked if any students at the luncheon identified with the problem.

Wright, who is using loans to attend Samford and also has a sister in college, says the voucher for textbooks from the Samford bookstore will be a great help. "I've texted my mom already," he said following the program.  "She's excited."

Spann, a 2011 biology graduate who is entering her fourth year of medical school at University of Alabama at Birmingham, said Samford's supportive faculty "pushed" her in the classroom and in research projects.  "It was interesting to take research and convert it into something important," said Spann, who as a Samford junior received a highly competitive United Negro College Fund-Merck undergraduate science research award valued at $35,000.

Littleton, a 2005 education graduate who is consistently recognized for her classroom and leadership skills, noted how Samford's teacher education curriculum exposed her to various school environments.  "Being placed in different school systems helped me see what education looks like in urban and suburban settings.  I saw good teaching and not so good teaching. It all helped me to mold my own teaching style," said Littleton, who teaches elementary school in Birmingham.

Watson, a 2001 bachelor's degree graduate who earned a Master of Divinity degree from Samford's Beeson Divinity School in 2010, said that learning to develop authentic relationships with people from backgrounds both similar to and different from his taught him how to communicate in a genuine way.  "I can like someone, but hold them to a certain standard," said Watson, who employs the skill set in his work as program director of the Birmingham Urban League, a member of the Birmingham Board of Education and associate minister at Greater St. John Missionary Baptist Church.

Towns, a 2013 graduate, said his life changed for the better after enrolling at Samford, and that his desire to see other lives changed led to the formation of RANSOM (Radical Athlete and Student Oasis Ministry).   The Samford Bulldogs defensive tackle who was often sidelined with injuries advised building a relationship with God in the good times, "so it will be there in the bad times."

"I knew I was more than an athlete, and my purpose was to do more than football. I'm excited about the young men God has helped me mold," said Towns, whose immediate future beckons to the National Football League draft, or, "if that doesn't work out," to the University of South Alabama medical school, where he has been admitted.

Denise J. Gregory, inaugural director of diversity and intercultural initiatives, updated the crowd of 238 on the work of Samford's new office of diversity.

Initiatives include outreach and collaborations with area high schools that enroll predominately minority students, and partnering with the office of admission to increase  recruitment of minority students and with the Howard College of Arts and Sciences to present the Minority Youth Science Academy.

The Academy, a three-day residential program set for July 6-9, will mentor outstanding minority high school students who aspire to careers in the sciences.

"We have provided great opportunities for students to enhance their development and grow as a leader," she said of the new office, adding that in order to continue quality programming initiatives and student support financial assistance is a must.

"Unlike a traditional scholarship, all donations will be used to bridge the gap of current minority students who need a little extra to make ends meet and make possible finishing what they started at Samford," Gregory said.

Samford vice president of advancement Randall Pittman underscored the importance of the fund, and announced that a generous Samford graduate promised to match "dollar for dollar" any gift made to the fund by donors at the luncheon.

Isaac Cooper, a 2012 graduate, announced the formation of the Samford Black Alumni Association, calling it a way that its members can be helpful to students and new graduates.

"We need mentors to encourage students to leverage their Samford experience," the Birmingham financial advisor said, admitting that he did not fully realize the value of his degree "until I saw somebody's response to it."

The SBAA, an extension of the Samford Alumni Association, is supported by the Office of Alumni Programs.  For more information on ways to get involved, contact alumni programs interim director Molly McGuire at msmcguir@samford.edu.