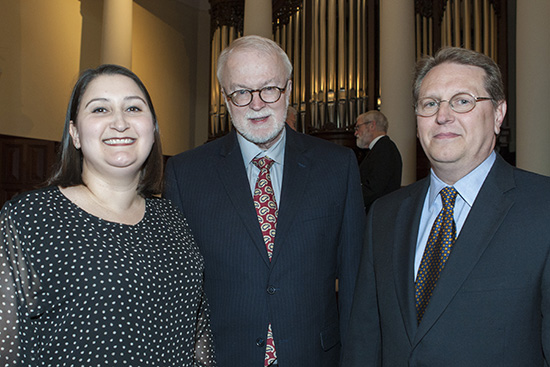 Morrison, who earned a Beeson degree in 1996, was named the Master of Divinity Distinguished Alumnus.

Teel was named Doctor of Ministry Distinguished Alumna. She earned a D.Min. degree at Beeson in 2010 after earning a M.Div. degree at the school in 2003.

Of the many things about Beeson Divinity School that speak to the power of God and express the mission of the school, said dean Timothy F. George, the most telling is the group of men and women who attend the school and go out to minister to all people.

"We now have more than 1,000 graduates who are taking the gospel to the ends of the earth," said Dr. George. "They have done us proud."

Morrison, an executive with McDonald Group, Inc., is chair of the steering committee for Beeson's Charles T. Carter Baptist Chair of Divinity campaign. Beeson's director of external relations from 1996 to 2001, he is an ordained deacon and minister who teaches Sunday School at Shades Mountain Baptist Church.

In presenting Morrison with the award, Dr. Carter noted that he has known the honoree for almost 40 years. "He was saved and baptized at Shades Mountain Baptist Church," said Carter, who served many years as pastor of the church and now teaches at Beeson.

According to Beeson director of operations Jim Pounds, Morrison is "the consummate Beeson advocate," who has continually sought ways to promote the divinity school to area churches, prospective students, peer institutions and donors.

Teel, pastor for young families and students at Bella Vista Community Church in Bella Vista, Ark., was cited for the enthusiasm that she brought to Beeson as a student and continues to show in her ministry.

Mark Searby, director of Beeson's doctor of ministry program, noted the role Teel played in the close-knit setting of that degree program.

Teel's "contagious enthusiasm" for Christ and His church served as a constant source of encouragement to her fellow students at Beeson, said Searby. "She was an enthusiastic learner and an excellent student, and is a reflective practitioner," he said.

According to Eric Sloter, senior pastor of Teel's Bella Vista church, the award recipient is a "truly gifted and passionate" minister of Christ.  "Her heart of service and her love of people is evident in everything she does," he said.

Teel holds a bachelor's degree from Blue Mountain College in her home state of Mississippi.