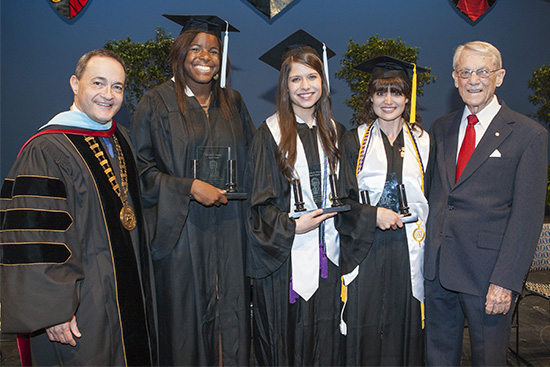 The award recognizes a graduating senior who has exhibited a serious commitment to being a student and achieving academically, to honoring Christ, to personal health, and involvement in student life.

Barnette, an education major from Birmingham, is a dean's list student, Samford Ambassador, University Ministry Council member and a winner of the Frances Marlin Mann Award for Leadership and Character.

She was cited for, among other qualities, a commitment to the education of poor and underprivileged children which she has demonstrated locally and at an academy in Uganda.  This fall, she will pursue a master's degree in education with a concentration in urban education.

"Hannah views all of this as her way of faithfully fulfilling Jesus' mandate of proclaiming good news to the poor and setting the oppressed free," wrote a nominator, noting her many sincere Christ-like qualities, her gentle sprit, trustworthiness and reliability.  "She is known among her peers to be a wise and discerning and wonderful listener."

Her nominators noted her genuine support of all campus athletic events and her encouragement of others to achieve academically and to use sport as a vehicle for sharing their faith.

She will work with at-risk students in the inner city area of Seattle, Wash., through City Year, a highly competitive program that seeks to reach urban youth through education.

Warwick, an arts and marketing double major from Alpharetta, Ga., has served on arts and business student advisory councils and as president of the Samford circle of Omicron Delta Kappa leadership honor society.

She was cited for her leadership roles in both Brock School of Business and the School of the Arts, and her "incredibly well-rounded and active involvement" in student life. In addition to starting Biblical Fellowship in the business school, she was integral to the creation of the now annual Arts Ambush day.

"She has excelled as leader, scholar, artist and diplomat.  She possesses the uncommon union of tact, grace intellect, and care. All of this is packaged with a positive attitude and genuine concern for those around her," wrote one nominator. Warwick plans a career in creative fundraising.

The names of the awardees are inscribed on a permanent plaque in the Harwell G. Davis Library.

The John C. Pittman Spirit Award was established in 2004 to honor the longtime Birmingham insurance executive's 50th anniversary as a member of the Samford Board of Trustees. The 1944 Samford graduate is now in his 61st year as a trustee.