Published on November 1, 2014 by William Nunnelley   Share this on: 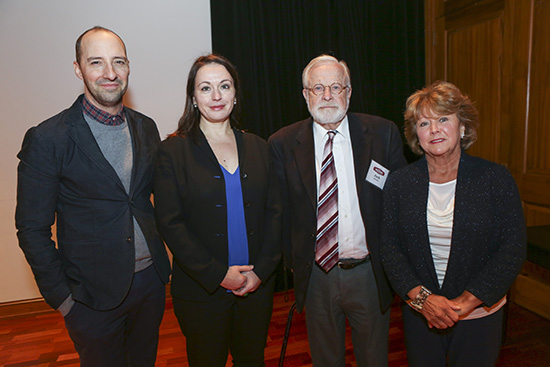 Those inducted were Jack Brymer, a veteran denominational journalism and communications specialist; Carol Guthrie, head of the Washington Center for the Organization for Economic Cooperation and Development, a Paris-based international organization of the which the United States is the largest member; Tony Hale, an Emmy Award-winning actor in the Arrested Development and Veep television sitcoms; and Debbie McGrady, retired former administrative assistant in the JMC department.Wall of Fame

Induction to the Wall of Fame is considered the highest honor the Samford JMC department can bestow on its graduates and members, said department chair Bernie Ankney. The department is the oldest journalism program in Alabama.

Brymer was inducted by Mark Baggett, a Samford English and law professor who described the 1967 JMC graduate as “irreverent, free-thinking and a journalist par excellence.” Brymer served as the first managing editor of The Alabama Baptist newspaper, helping it grow to the second largest circulation among Baptist papers in America, and later as editor of The Florida Baptist Witness. He joined Samford in 1994 as director of publications and served later as communications director until his retirement in 2003.

Guthrie graduated from Samford in 1993 and began a career in television news in Baltimore, Maryland, and Washington, D.C. She later served as a media consultant for presidential candidate Al Gore and as communications director for U.S. Senator Ron Wyden (Dem., Oregon). Guthrie was communications director for the U.S. Senate Committee on Finance from 2005 until 2009. She was then named assistant U.S. trade representative for public and media affairs in the Barack Obama administration.

Hale graduated from Samford in 1992. He is best known for his roles as Buster Bluth in Arrested Development and Gary Walsh in Veep, for which he earned a 2013 Primetime Emmy Award for Outstanding Actor in a Comedy Series. A versatile communicator, he also has written a children’s book released during the summer entitled Archibald’s Next Big Thing. Hale announced the establishment of a film production scholarship at Samford during the induction program, presenting the first award to Samford student Jenna Adams.

McGrady served as JMC administrative assistant from 1994 to 2013, serving as a mentor and “second mom” to students. “Although she was never a journalist by trade, she had a way with words, a gift for saying the right thing at the right moment,” wrote JMC grad Anna Cox. “A master of words in her own right, McGrady belonged in the JMC family.” McGrady worked for NBC 13 Television in Birmingham for 18 years prior to joining Samford.