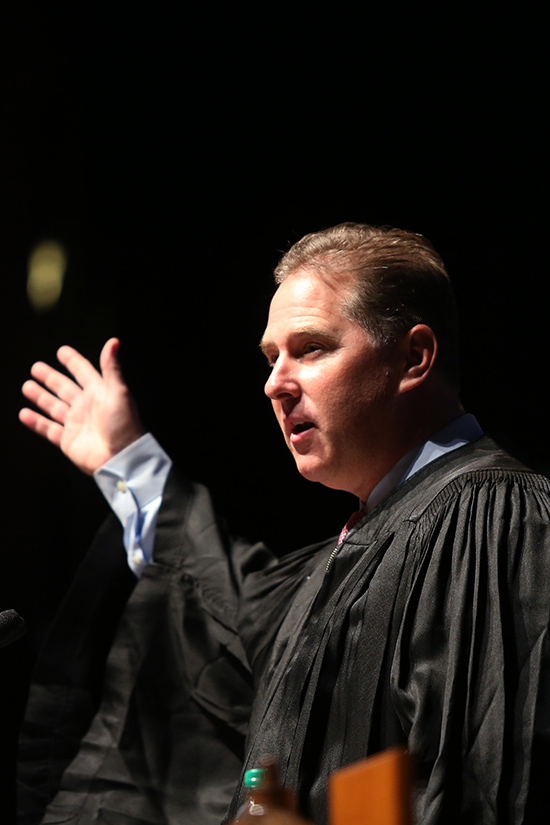 It was a business professor at Samford University three decades ago that jolted student Martin Newton out of his academic complacency and ultimately led to his being named director of athletics at his alma mater.

Newton delivered the commencement address May 16 for Samford's Brock School of Business, which he confessed was a "humbling" experience.

"You see, when I came to Samford in 1979 I had it all figured out," he said. "I was going to star on the basketball team, graduate and go play in the NBA (National Basketball Association) and make lots of money, then coach. Academics were not that high on my priority list and I did just enough to get by."

But it was business professor Fred Hendon, Newton shared, who first taught him about priorities which "changed my life." Their conversation centered around the required course Economics Theory, which only Hendon taught.

"Mr. Newton," said Dr. Hendon sternly, "let me remind you that if you give the same effort you did in Econ I & II, I will not hesitate to flunk you and keep you from graduating.  Right now, you are just average. You have the potential to be great but you are just average.

"Dr. Hendon cared enough about me to tell me the truth and to help me get my priorities in line and see the bigger picture," Newton told the graduates. "It's a lesson I've shared with my children their entire life."

Newton shared a family experience that provided perspective to life and is a reason why he said he loves being at Samford.  "We have things in the proper perspective here," he said. "You have seen it every day during your time here." Then he asked the students to repeat in unison the Samford motto: For God, For Learning, Forever.

"But we also learn to deal and grow from our mistakes, he said.  He cited Tony Gwynn, the famed baseball player, as a model of someone who did not let failure define him.  Gwynn had 3,000 hits but struck out 5,119. "You see, for every success that Tony Gwynn had in his career he had two failures."

Newton closed his address with a quote from the book, A Purpose Driven Life by Rev. Rick Warren, in which the author states it is Christ-like conviction that gives us our sense of purpose in life.

"The first sentence in the book says it all, Newton said.  "It's not about you'."  Then, the author goes on to say that "knowing what to do (knowledge), why to do it (perspective) and how to do it (skill) is absolutely worthless if you don't have the conviction to motivate you to actually do it."

"Today as you leave this beautiful place you've called home for the past several years and enter in to the real world equipped with the knowledge, perspective and the skills to be successful in life, I challenge you all to take some time daily to focus on what your Christ like Conviction looks like to give you that sense of purpose for your life and remember it's not all about you," Newton concluded.

Newton returned to his alma mater in 2011 after spending two years as director of basketball operations at the University of Kentucky where he managed an $11 million budget, along with fund-raising, compliance, scheduling, marketing and academic support for the men's basketball program. Before that he worked in sports marketing for Converse for 13 years. He and  his wife, Cindy, have three grown children, Katie, Madison and Charles.