Published on November 1, 2014 by Mary Wimberley   Share this on: 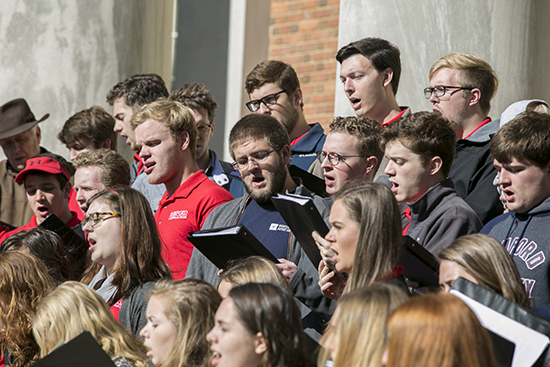 A chilly day didn’t keep an enthusiastic Samford University crowd from making warm memories at homecoming 2014 on Nov. 1. From the early-morning harmonies of the A Cappella Choir’s outdoor concert to the final whistle of a winning football game, hundreds braved temperatures in the 50s to take it all in.

As the choir invited its audience to join in the singing of the Alma Mater, 2006 graduate Alicia-Ann Smith happily sang along. “It’s my first time back for Homecoming, and I’m already glad I came,” said Smith, a former choir member who teaches school in Montgomery, Alabama.

Will Allen, Class of 1996, brought his wife Jenny and children, Lucy, 9, and Sam, 12, to homecoming for the first time in a while. The history and political science major, now an attorney in Brookhaven, Mississippi, had arrived early to attend his first meeting with the Howard College of Arts and Sciences advisory board.  “I wanted to give back,” he said of his decision to serve, “because my Samford years were great.”

Sam attended a baseball camp at Samford last summer, Allen said. “Now he and Lucy both say they want to attend Samford someday.”

Many members of the Class of 1989 convened to celebrate their 25th anniversary as Samford graduates.  Reunion chair Edith Foster Lyon welcomed classmates who came from nearby and from a distance, such as Rebecca Brown Michael, now an attorney in Washington, D.C.

“It’s fun to come back to see people I haven’t seen in a long time, and to see how Samford has changed since our day.  It’s a lot bigger and has more programs. And the campus gets prettier every year,” said Boackle, a two-time Samford mom. Her daughter Mallory Boackle is a 2014 exercise science graduate and daughter Maria Boackle is a 2010 nursing graduate.

Albeit in different health-related occupations, all three now fall under Samford’s new College of Health Sciences, which was launched in 2013. “We are all excited about the new school,” Boackle said.

Larry Cosper, a 1974 graduate from Graham, Alabama, “near Wedowee,” was on hand to visit friends and to cheer on the Bulldogs against Concordia College.

“I usually attend several football games a year. It reminds me that I was young once,” said Cosper, a religion and psychology major who played on the team in the early 1970s. He surely left Seibert Stadium happy as this year’s Bulldogs handily defeated their homecoming opponents 55-0.

Isaac Cooper, a 2012 graduate, was beaming at the Samford Black Alumni Association’s first homecoming tailgate tent. At one point as many as 40 graduates had gathered around to enjoy the hot dogs and hamburgers.

“I’m very pleased at the turnout,” said Cooper, an SBAA board member and new member of the Samford board of overseers.  “It was great to see people meeting each other, interacting and re-connecting.”  A bit of history unfolded when he met a 1970s alumna who was the first African American graduate of the Samford nursing program.

Susan Todd Doyle also stayed busy hosting the Samford Parents tent.  “I think we’re popular because we have hot apple cider on such a cold day,” quipped the 1980 graduate who heads the Samford parent programs.

Many members of the Samford Class of 1964 enjoyed a luncheon that afforded them time to get reacquainted and reminisce.  Some had not seen each other since graduation.

“This is the first homecoming I’ve been to, and I don’t know why it took me so long,” puzzled Alice Goss Martin of Auburn, Alabama. “I’ve really enjoyed seeing people I’ve not seen in years.”

Atcheson shared reflections that prompted the golden anniversary class to recall memories of their own.  Talk of  programs in the newly built Reid Chapel, rat hats, pep rallies at the women’s dorm and using cafeteria trays to slide down snowy campus banks brought back fun memories. Others were more somber.

John F. Kennedy was killed our senior year, said Atcheson, who like most Americans at the time, can recall exactly where he was when he learned the news that November in 1963.

“I was giving a campus tour to visitors and was between the pharmacy building and Reid Chapel when someone told us the president had been shot,” said Atcheson.

White, senior class president, announced that the class had raised funds for a special donation to the Sigurd F. Bryan scholarship fund for religion students.

“He was instrumental in the lives of many members of our class,” White said of Bryan, a 1946 Samford graduate who taught religion at the school for 46 years before retiring in 2002.  Bryan was at the luncheon to accept well wishes from the anniversary class.

White noted that the Class of 1964 had a lot of enthusiasm as students.  “They just had a great spirit about them,” said White, who met his wife, Gay Morris White, while at Samford.  They both graduated the summer of 1964.

Seniors Hannah Newman and John Hunsicker were chosen to reign as queen and king during homecoming activities.  They were elected by vote of the student body.

In the Samford Pet Photo Contest, Lille, a dog owned by alumna and education faculty member Daphne Carr, took top honors.  The first-time event raised a total of $3,000-plus to support Samford programs, with more than $1,000 destined for the Orlean Bullard Beeson School of Education.