Ciliate Research at Samford Could Help Understanding of Freshwater Ecosystems 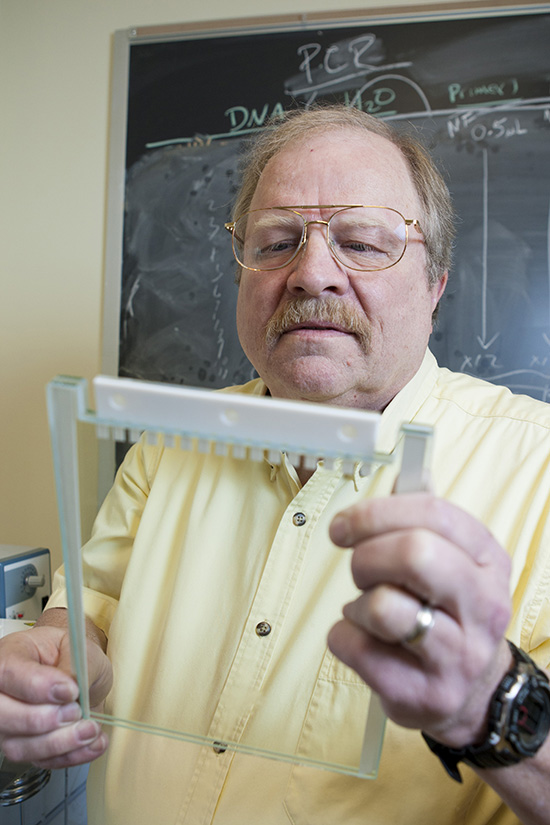 Note:  The following is part of an occasional series highlighting projects supported by faculty development grants funded through the Office of the Provost.

Microscopic single-celled organisms called ciliates may be tiny, but they play an important role in the food web, says Samford University biology professor David A. Johnson.

This diverse and plentiful constituent of freshwater communities is a primary consumer of bacteria and single-celled algae, Dr. Johnson explains, and bridge the gap in the food-chain between bacteria and lower animals.

Yet, given their critical role, he said, "There is a lack of survey information detailing the makeup of freshwater ciliate communities throughout the U.S., including in Alabama."

For three years, beginning in 2009 and using water samples from a small stream near Samford's Propst Hall science building, he and his research students developed strategies for surveying ciliate populations. Although a resulting scholarly paper offered a descriptive "snapshot" of the ciliate communities present in the tributary to nearby Shades Creek, the data was limited due to the lack of needed equipment.

The DGGE apparatus allows the quick separation and characterization of DNA molecules--in this case, from different organisms--that differ by small degrees, explains Johnson.

"Our goal was to develop this system into one that could be used to sample ciliate communities from a variety of places at a variety of times and obtain a quick, overall picture of ciliate diversity in these communities," explained Johnson, a specialist in genetics and molecular biology who holds bachelor's and master's degrees from Samford and a Ph.D. from Emory University. He joined Samford's biological and environmental sciences faculty fulltime in 2008 after almost 20 years as a teaching missionary at Seinan Gakuin University in Fukuoka, Japan.

"The project definitely proved the potential of using the DGGE to gain an understanding of freshwater ciliate communities," said Johnson. "Although they are an extremely diverse group with complex classification, and are difficult to study, a knowledge of these communities should contribute greatly to an understanding of freshwater ecosystems and what constitutes a healthy versus non-healthy system."

Equally important to the professor is the experience that Lavigne and Davis received in molecular biological techniques. The two May 2013 honors graduates were each recipients of student grants to support their summer 2012 research.

Lavigne and Davis presented the results of their research at a program sponsored by Samford's departments of chemistry and biological and environmental sciences in the fall of 2012. They also shared their data at the 2013 annual meeting of the Alabama Academy of Science, held at Samford.

They are both grateful for their undergraduate research experience.

"The project started us at ground zero, and allowed us to work hand in hand with Dr. Johnson," said Lavigne. "We had to apply all of the scientific method, and it allowed us to learn to accept the results as they were presented.  It challenged us to be able to adjust our experiments, based on what our results were showing."

The project gave Lavigne much to discuss with a medical school professor during a recent admission interview. "He was impressed that the project had so much student and professor interaction," said Lavigne.  "Instead of just running tests, we actually used our scientific ability and research to form the project."

"When he told me that 'getting my feet wet' with this project would prepare me very well for doing my own research one day, I was blown away and encouraged," said Lavigne.

Davis believes that the Samford research played a role in her being admitted to medical school at the University of Alabama at Birmingham, where she is a first-year student.

In her admission interview, she said, she was able to speak confidently about the project that she had helped organize.

"Many of my classmates who did research at other undergraduate institutions are amazed by the close contact that I had with my mentor," said Davis, who appreciates that Johnson was "always helping and teaching us."

Their experience in the Samford laboratory validates Johnson's theory on the value of student research.

"I have always been a firm believer that hands-on experience, especially in the newest technologies, is a far better teacher than any lecture-room experience," Johnson said.