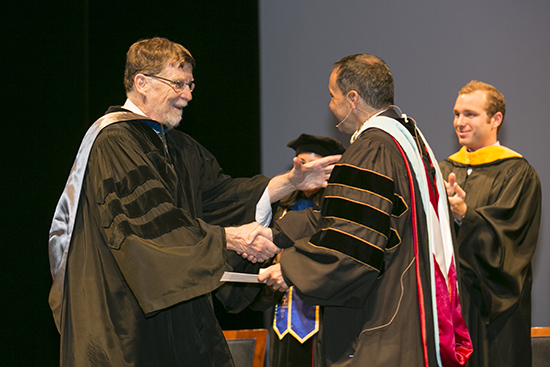 Collins was presented the award by Samford president Andrew Westmoreland during the opening convocation of the fall semester Tuesday, Aug. 26. Finalists for the award were nominated by members of the Class of 2014.

Westmoreland described Collins as a teacher who students instantly recognize as a great educator.

“Students frequently remark on his ability to encourage intellectual curiosity and to discuss Plato and Aristotle so naturally that one suspects he walked with them at the Academy in Athens,” said Westmoreland.

“Although his area of expertise is political philosophy, he might easily move in the course of a discussion from Hume’s Treatise of Human Nature, to Bach’s Fugue in D Minor, to the King’s Gambit in chess, to Alabama politics,” Westmoreland said of Collins, who joined the Samford faculty in 1987.

A native Alabamian, Collins earned bachelor’s and Ph.D. degrees from Florida State University and served as a Navy intelligence officer in the Gulf of Tonkin during the Vietnam years.

Westmoreland pointed out that Collins “loves a good academic argument, and encourages students to see knowledge not as settled territory, but as contested ground.”

The Buchanan award honoree is also known for his influence on the Samford faculty.  He contributed to the development of Samford’s interdisciplinary core curriculum and has represented Samford at many national meetings and conferences, Westmoreland noted.

Collins received an ovation from the convocation crowd of students, faculty and guests in Wright Center.