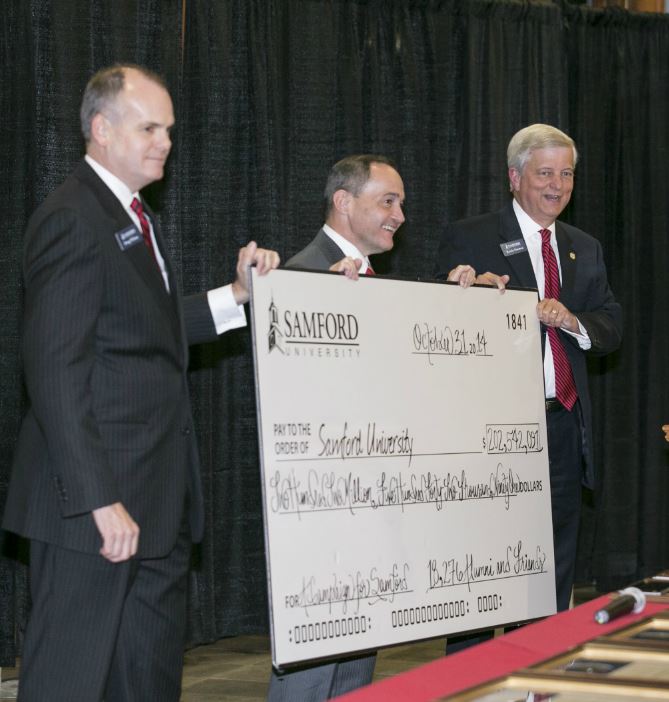 Samford University has declared victory in the multiyear “A Campaign for Samford.”

The university announced during its recent homecoming that as of Oct. 31, the final day of the campaign, a total of $202,542,090 had been received in gifts and pledges from 18,276 different donors. The original campaign goal was $200 million, and the university had announced in late summer that it had exceeded the goal five months before the original ending date of Dec. 31.

“Samford is better today because of what donors provided through ‘A Campaign for Samford,’” Pittman said. “Tonight, we celebrate victory, but, tomorrow we start planning for the next campaign.”

During the campaign, 172 new endowed funds were established. These will provide strong financial support for academic programs and student scholarships well into the future, Pittman noted.

He also stressed the importance of annual fund gifts because tuition and fees provide only about 70 percent of the university’s annual operating budget. “Annual gifts come to us in all amounts and are critical to ensuring that we continue providing the level of academic programs and experiences that our students and their families have come to expect from Samford,” Pittman said. “We cannot stress enough how important those gifts have been and will continue to be.”

Among the major gifts was more than $34 million from Alabama Baptist churches, primarily through the Alabama Baptist Convention’s Cooperative Program giving plan. An additional 32 donors made gifts and pledges of $1 million or more.

Pittman called A Campaign for Samford the “most challenging” in university history, more than doubling the previous record campaign.

The “Making a World of Difference” campaign had an $84 million goal and coincided with the university’s sesquicentennial in the early 1990s. “The Promise for All Generations” campaign in 2003-06 raised about $54 million and included Pete Hanna Center, Jane Hollock Brock Hall and other projects. “The Samford Commitment” campaign early in the administration of previous president Thomas E. Corts had a goal of $28 million.

At the time, each of these campaigns was considered very ambitious, Pittman noted, including the most recent, which was launched in the midst of a global economic crisis.

“The Samford community consistently has demonstrated its faithfulness in giving through the generations,” he said. “To have 18,276 members of our family contribute to this campaign affirms that they are committed to Samford’s mission of providing academic excellence in an environment undergirded by a Christian worldview.”

Pittman noted that university officials already have begun planning for the next campaign which likely will launch in 18-24 months.