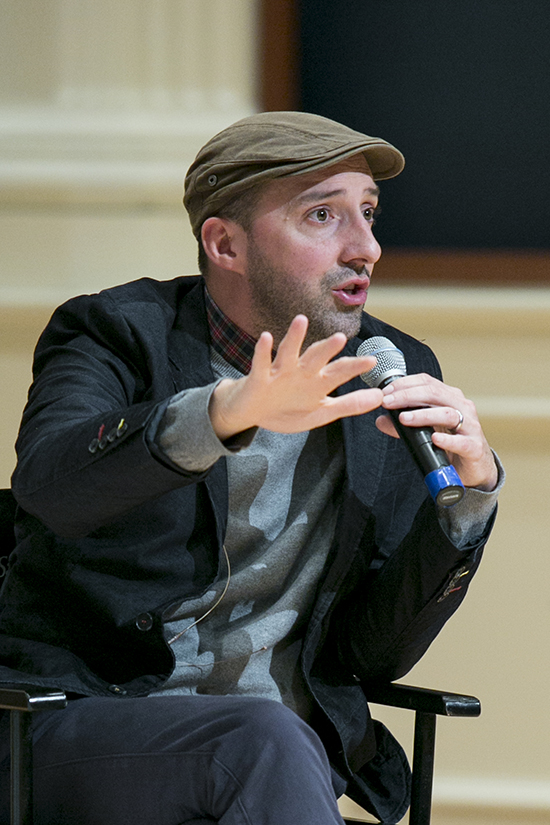 Finding contentment in the moment is important to finding success in life, according to award-winning actor and children’s author Tony Hale.

Hale, a 1992 Samford University graduate, regaled an audience of Samford students, alumni and friends, with stories of his life journey and acting career during “An Evening with Tony Hale” during Samford’s homecoming weekend. He touched on a wide range of topics over 90 minutes, including his faith, winning an Emmy Award, favorite Samford professors and even mistakes he made as a student.

But, it was life lessons that received the most attention.

Hale is so adamant about finding contentment that he repeated it several times during the evening, especially stressing it to the students present. It is a theme that is used in his recently published children’s book, Archibald’s Big Adventure.

“When (Archibald) is on an on adventure, he’s always looking for the next big thing,” Hale said of the story’s main character. “You have extreme value where you are. It’s not about what you might get.”

Hale said it was a lesson he embraced when starting his acting career and having to work multiple jobs, doing commercials and other one-time acting roles while waiting for the “big break.” When he landed the role of Buster Bluth on the award-winning television show Arrested Development, he thought he had “so much power he thought being on a situation comedy was the ultimate dream.” He said it was overwhelming because his wife, Martel, had to leave her job on the crew of Saturday Night Live and relocate with him to Los Angeles.

Responding to a question from the audience, Hale said fame had taught him another lesson. “Over the past 4-5 years I have thought a lot about this,” Hale said. “I think we all want to be known. In today’s world it is all about how many Twitter followers and Facebook friends you have.”

There are more important things, though, than “being known,” Hale added. “In my world, if you are known by God and by people who love you, that’s all you need. That’s all the ‘known’ I will ever need.”

Hale also said his faith is an important part of who he is. While living in New York early in his career, he helped start a ministry called “Haven” for Christians in the arts. “I didn’t know anybody, and I met a lot of Christians who were pursing the arts," he explained. “They didn’t have a lot of support from home or their group.”

The group did a lot of service and ministry, such as baking apple pies for the homeless at Thanksgiving. “To get your eyes off yourself is the best gift you can give. That was my support system,” he said.

Acknowledging that there is a perception that faith and Hollywood don’t mix, Hale said “My faith is everything to me. I have ownership over it. I don’t see how people walk the uncertainty of this business without faith. Knowing that God has my back and I can trust him is everything to me.”