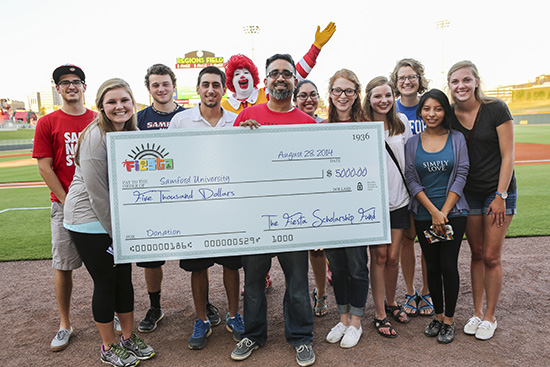 The Birmingham-based Hispanic organization Fiesta recently made a commitment to Samford University for up to $5,000 to be used as scholarships for Latino students facing financial difficulty. The presentation was made during a Birmingham Barons minor league baseball game.

Carlos Alemán, assistant professor of history and director of Samford’s Latin American Studies Scholars Program, believes that the scholarship will help minority students. “The scholarship is a way to alleviate the burden that some Latino students may encounter during their time at Samford in an immediate and impactful way,” Alemán said.

The scholarship presentation is part of a bigger relationship Samford has with Fiesta, whose board president, Matt Ennis, is a 2002 Samford graduate. Partnering with Fiesta is a part of Samford’s increased efforts to create an environment for all students from all backgrounds to feel comfortable, Alemán noted.

The evening included a flag procession around the baseball diamond. Samford students from the Latin American studies program carried flags from Latin American countries and one from the United States to demonstrate the bond between Latin America and the U.S.

“The baseball game and flag procession was a great way to reward both the Latino and Latin American Studies students at Samford,” said Alemán.

The presentation came as Samford was preparing to celebrate Hispanic Heritage Month, which is being coordinated by the Latin American studies program and Samford’s Office of Diversity and Intercultural Initiatives.