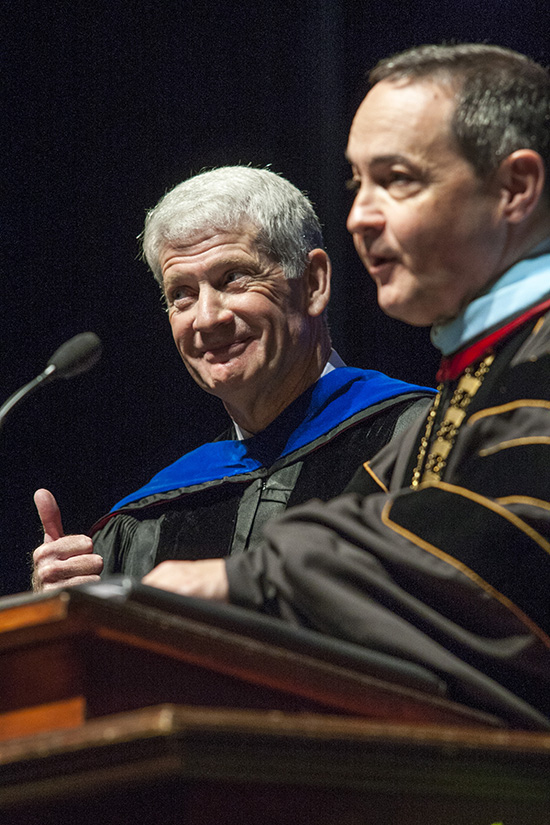 Judson College president David E. Potts delivered the college’s commencement address, emphasizing the close historical ties between the institutions. Samford was founded as Howard College in Marion, Ala., shortly after the founding of the Baptist women’s college. Potts himself has a long history with Samford. He holds bachelor of arts and master of science degrees from Samford, and was surprised at the commencement ceremony with an honorary doctorate from his Alma Mater. Westmoreland, Samford provost Brad Creed and board of trustees chairman Bill Stevens presented the Doctor of Humane Letters honoris causa in recognition of Potts’ accomplishments and service.

In addition to his study at Samford, Potts worked at the university for many years, starting as an admissions counselor in 1972 and rising to become director of financial aid. He served as Vice President for Development at Judson from 1980-1984, then returned to Samford as assistant to the president, organizing and implementing a capital campaign. In 1987 he returned to Judson as executive vice president for administration and vice president for development. He became Judson’s president in 1990.

Potts has long been actively engaged with the problems of poverty in Alabama, serving on the Governor’s Black Belt Action Commission and with the Sowing Seeds of Hope and Alabama Poverty Project nonprofit organizations. In his address–An Education for Transcendent Living–he emphasized the spirit of Christian service that created Samford and Judson and continues to find expression in the work of students, faculty and staff.

Potts noted that the name of Howard College of Arts and Sciences honors the English prison reformer and philanthropist John Howard. That might seem a strange choice for an antebellum Alabama college, but Potts invited his audience to consider the lives of Edwin Davis King and Julia Tarrant Barron.

“In the span of seven short years,” Potts said, “King and Barron, with what must have been the leadership of the Holy Spirit, gave rise to the Judson Female Institute in 1838, Howard College in 1841, The Southwest Baptist Newspaper in 1843–now the Alabama Baptist–and the Board of Domestic Missions in 1845–now the North American Mission Board.”

Barron wed a wealthy Marion businessman and was widowed soon after. “For almost four decades, Mrs. Barron found herself among the few independent businesswomen in the state of Alabama,” Potts said. Bankrupt after the Civil War, she reflected on her previous philanthropy and regretted only that she had not given more.

Potts observed that these first trustees of Howard and Judson hired presidents who were devoted abolitionists and, in the case of Judson, “believed deeply that women in the 19th century should have an educational opportunity equivalent to the men at Harvard and Yale at a time when most physicians, educators and sociologists deeply believed that a woman would harm her health if she applied her mind in the same way that a man applied his.”

It is not so surprising, then, that Howard College took the name of a man renowned for his service to the cast-offs of callous society. Potts offered the examples of King and Barron as the “antidote” for a self-absorbed and superficial society. He cited, among other scholars, the writings of Victor Strecher, which emphasize the importance of having a “self-transcending purpose.” But although Potts agrees with that emphasis, he finds it lacking in the “comprehension of the transforming power of the Christ.”

“While I may be able to compel myself to do things which should lift me beyond my circumstances and occasionally see the needs of those around me,” Potts explained, “it is as a Christ-follower that I am impelled – that is, the residence of Christ in me that is transformational to my life and to my behaviors.”

Potts reminded his audience that in the fourth Chapter of the book of Luke Jesus declares his mission to “preach the gospel to the poor… heal the broken-hearted… proclaim liberty to the captives and recovery of sight to the blind… and set at liberty those who are oppressed.”

“While you and I may not establish a college or university (although you should,) or organize a mission board (although you could,) or publish a religious newspaper, our transformation of heart and spirit impels us to live transcendently,” Potts said. As an example, he pointed to the annual Old Howard 100 bike ride through the Black Belt, sponsored by Howard College of Arts and Sciences. The ride celebrated its tenth anniversary in April with record participation and a ten-year total contribution of more than $35,000 for the Sowing Seeds of Hope organization in the Black Belt. Potts said that initiative and many other partnerships between Samford and Judson are making a difference in the counties where more than half the children and almost half of the elderly live in poverty.

Among other improvements, he said, Perry County has experienced a 21% decline in the stroke mortality rate over the past ten years. “I believe that the work of Samford’s people has had a direct effect in saving these lives,” he said. “Literally, your work in behalf of Sowing Seeds of Hope here in the Howard College of Arts and Sciences and also in the McWhorter School of Pharmacy is 'setting the captives free' by increasing life expectancies and the quality of life for men, women and children.”

Potts commended the academic achievements of the graduates, but reminded them of the university’s unique mission. “Thanks to the high purposes of this institution,” he said, “you have also had the opportunities and been blessed by moments where you have risen above yourself, beyond yourself, to care for others, where you have 'sent forth blessed light.'”