Published on February 1, 2014 by Mary Wimberley   Share this on: 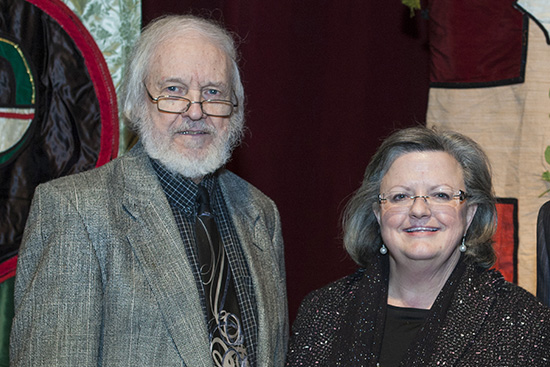 Dr. McDaniel, a 17-year veteran of Samford's Ida V. Moffett School of Nursing faculty, received the George Macon Memorial award for outstanding performance as a teacher and counselor, and who as a friend to students demonstrates the ability to inspire greatness.

Dr. Vann, whose teaching tenure at Samford began in 1970 and includes 36 years as art department chair, received the Jennings B. Marshall Service award for significant and sustained service contributions to the university.

Snow flurried outside  Wright Center as Samford provost and executive vice president J. Bradley Creed welcomed students and predicted that the 10 a.m. convocation would be memorable, "if only because of the weather."

Within an hour, however, the rapidly deteriorating--and unexpected--weather situation would cause the university to close at 11 a.m. and remain so through Friday, Jan. 31.

During the awards presentation, Dr. Creed noted that McDaniel is highly regarded as a "consistent source of knowledge, guidance and encouragement for students as they learn the intricacies of the research process and related statistical measures."  Many of her students go on to present and publish research done under her guidance, he said.

"Her willingness to give of herself both personally and professionally epitomizes what it means to be called to teach," said Creed, adding that McDaniel often works late into the evening to accommodate the schedules of students at bachelor's, master's, and doctoral levels.

The Birmingham native holds bachelor's, master's and Ph.D. degrees in nursing from the University of Alabama at Birmingham, and is designated as a National League for Nursing Certified Nurse Educator.

During Vann's Samford tenure, Creed noted, the art educator established new programs in graphic design and interior design that continue today, and has taught in virtually every art discipline offered at the university.

"His international courses in art laid the foundation for the present study-aboard program and piloted the possibilities for general education courses at the Daniel House," said Creed, referring to Samford's residence program in London, England. Vann  guided 18 alumni and friends trips to England, Scotland, Ireland, Italy and France.

Vann, a Samford graduate, holds a master of fine arts degree from the University of Alabama and a Ph.D. degree from Florida State University. The Cullman, Ala., native who also is pastor of Rocky Ridge Baptist Church is known widely for his chalk-art presentations in churches and other venues.

The two honorees were among several hundred employees and commuter students who were stranded  on campus Tuesday due to hazardous road conditions throughout the Birmingham area. Samford provided food in the campus dining hall and assisted with many other needs. Impromptu musical performances and movie showings helped the captive residence hall students and unexpected guests pass the time.

McDaniel, who lives in Hoover, Ala., did not leave campus until Thursday afternoon.  "We were well taken care of with the caf' food," said McDaniel, who slept in the nursing skills lab and was joined by several family members who were caught in the snowy predicament.

Vann and his wife, Mira, who had attended the convocation, were stranded until Thursday afternoon. They were grateful, he said, for the food and campus camaraderie as well as the make-shift foam mattresses that were pulled from storage in the theatre department. "It was a memorable week," said Vann, a Hoover resident. "Really, it was kind of fun."

During his convocation remarks, Creed used a story of two uneducated country boys from Texas to introduce a word new to most of the audience: quotidian, which means ordinary, or routine.

The lives of the two men who first met doing shift work at a Proctor and Gamble plant in the 1920s began in similar ways, but soon diverged into vastly different directions.

"Bud" opted for a reckless lifestyle that resulted in imprisonment and, after teaming with a former waitress, a notorious life of stealing and killing.  Better know as Bonnie and Clyde Barrow, the couple met violent deaths at the hands of law enforcement in Louisiana in 1935.

"Milburn," who led a much more quotidian life, lived 63 years longer than the gangster.  "Through his character, he demonstrated dependability, responsibility and loyalty," Creed said of his maternal grandfather, Milburn Walden, who retired after 45 years at Proctor and Gamble.

He valued thrift and education, and lived to see all of his four children, including Creed's mother, earn college degrees.

"We have high hopes for you," Creed told the Samford students. "We hope you do great things, but more than that, we hope you become good people who lead quotidian lives.  Be kind, compassionate, and courageous.  Love the truth and tell the truth. "

Don't overlook the power and purpose of living an ordinary life, he said.