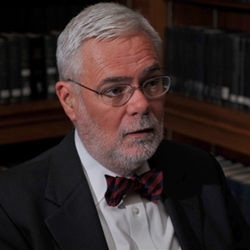 The overall theme for the week is "Christ in Ministry." The public is invited to any of the presentations.

Purves will give the Robbins lecture on Thursday, March 6, at 10 a.m. in Reid Chapel on the topic, "The Pastoring God." He will also lead a senior religion seminar on John Calvin and speak to a Wednesday evening gathering at Birmingham's South Highlands Presbyterian church.

A native of Edinburgh, Scotland, Purves came to the U.S. in 1978 and was minister of a Presbyterian church in Pennsylvania until 1983 when he joined the Pittsburgh Theological Seminary faculty.  He is the author of several publications on pastoral theology and ministry and is writing another book, Christology and Atonement.

He holds bachelor's, master's and Ph.D. degrees from the University of Edinburgh, and a master of theology degree from Duke Divinity School.

The Conger Lectures are made possible through the generosity of the late Colonel William E. Conger, Jr., who served many years as a personal advisor to Ralph Waldo Beeson, the founding benefactor of Beeson Divinity School.

The annual Robbins lectureship, established in 2008 to honor the memory of former Samford religion professor Ray Frank Robbins, focuses on the intersection of scholarship and Christian living.