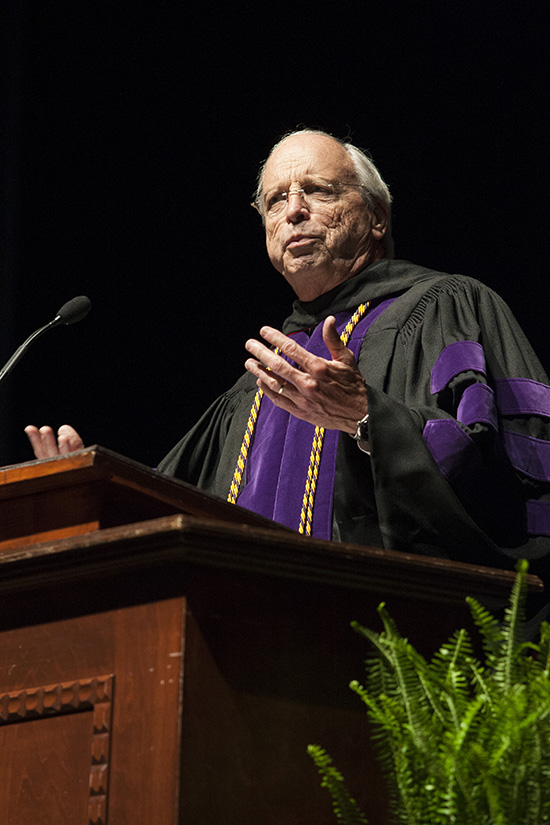 "You should serve others," he said.  "Regardless of where your legal career takes you, you will have an opportunity to serve.  Take advantage of that opportunity."

Carroll, Cumberland's dean since 2001 and a 1974 graduate of the law school, told the graduates the legal profession is the finest in the nation.  "It is the guardian of our constitution and the protector of the rule of law."

Carroll addressed a graduating class of 128 and an audience of more than 1,500 in Wright Center at Samford.  He shared several things he had learned as a lawyer and dean.

Serenity Now.  During times of stress, think about the Serenity Prayer: "O God, grant me the serenity to accept the things I cannot change, the courage to change the things I can and the wisdom to know the difference."  Avoid screaming "Serenity Now," like the character on the Jerry Seinfeld Show.

Don't Wait for Someday.  He quoted Credence Clearwater Revival singer John Fogerty's song "Someday" that ends, "Someday never comes."  The dean said, "To me that song is a reminder that we need to live every day to the fullest."

Be Nice.  "Some people suggest that the way to be a successful lawyer is to engage in scorched earth, take no prisoners, win at all cost litigation.  The successful lawyers I know are not that way.  They are zealous advocates for their clients but they are respected by lawyers on the other side because they are good people."  He cited the late Jere White, a 1980 Cumberland alumnus, as one of the finest examples of that type.

What Rascal Day Teaches Us.  Rascal, the canine mascot of Cumberland in the 1930s, is remembered every year in a program in which law students bring their pets to campus.  Carroll said he was ambivalent about the celebration when he first became dean, but came to realize what Rascal stands for, the importance of relationships.

What Mick Jagger Teaches Us.  Carroll described himself as "a huge Mick Jagger fan."  The line he wanted to leave the class with: "You can't always get what you want but if you try sometime, you get what you need."

Learn to Forgive.  "A client, another lawyer or a judge will do something which angers you, and the temptation is to hold a grudge, to want revenge on that person.  Fight that temptation - learn to forgive and forget."

Carroll will step down as dean June 30, and return to the Cumberland classroom in 2015 after a sabbatical leave this fall.  The former federal magistrate judge told the Cumberland graduates, "There will be opportunities for you in the law that people in my generation never thought possible and there will be abundant opportunities for service that will round out your professional career."

Following Carroll's remarks, Samford Provost and Executive Vice President Brad Creed announced that the Samford Board of Trustees had approved a new award, the John L. Carroll Service Award, in recognition of the retiring dean's service and leadership of the law school.  The first recipient is Dean Carroll.