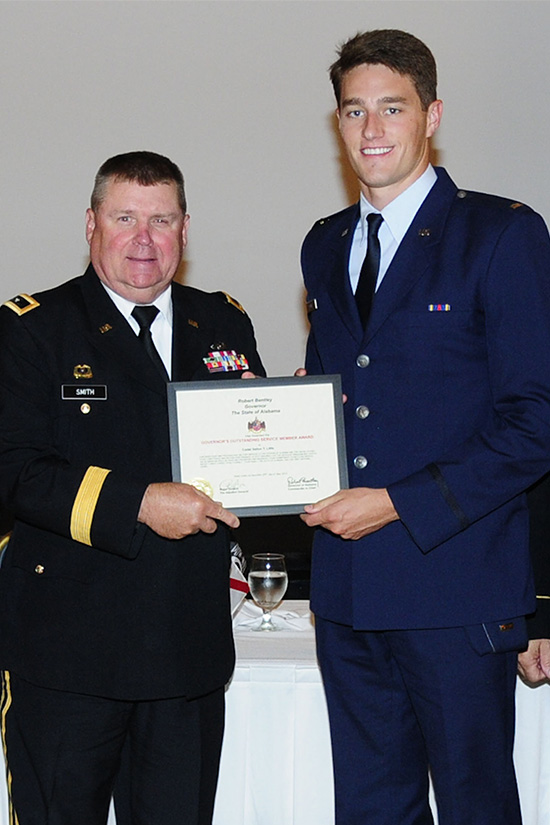 Second Lieutenant Trent Little, a Spring 2014 Samford Graduate and former Samford Air Force ROTC Detachment 012 Cadet, was awarded the Governor of Alabama's Outstanding Military Service Award May 22 during a program at Maxwell Air Force Base, Ala.

Lt. Little was the only Air Force cadet from the six different AFROTC detachments located throughout the state of Alabama to receive the award. (He is pictured at right with Major General Perry G. Smith, Adjutant General of Alabama and Commander of the Alabama National Guard.) The Governor's Award Program was established 32 years ago to honor outstanding Active Duty, Guard, Reserve service members and AFROTC cadets from the state of Alabama.

Little excelled as a Samford cadet, noted Lt. Col. Travis Dixon, Commander of Samford's AFROTC detachment. During his Senior year, Little was selected as the Cadet Wing Commander and placed in charge of all cadet operations. During his commissioning ceremony May 16, he was recognized as one of the top 10 percent of all Air Force ROTC cadets in the nation. He earned the honor of Distinguished Graduate.

Little will enter the Active Duty Air Force July 5 and will serve as an acquisitions management officer at Wright Patterson Air Force Base, Ohio.