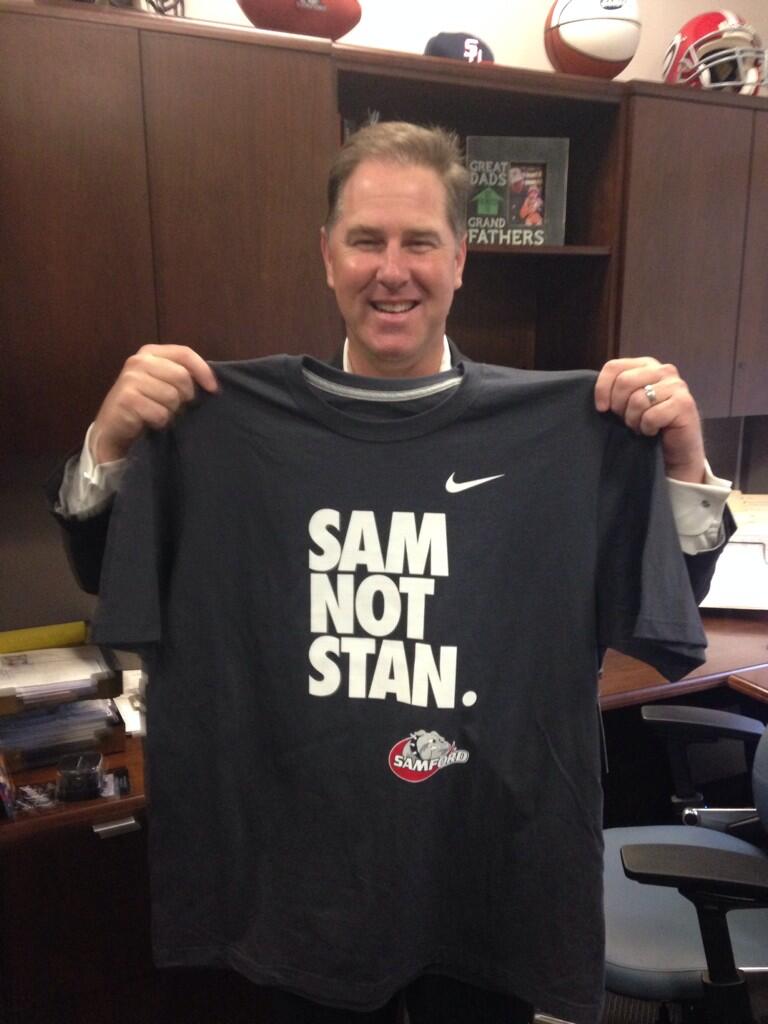 The Samford University athletics department officially unveiled its #SAMNOTSTAN marketing campaign Feb. 24 with the launch of www.samnotstan.com and the announcement of a limited-edition t-shirt to go on sale Feb. 27 during the Bulldog men's basketball game.

The #SAMNOTSTAN campaign is a comprehensive digital campaign designed to gain awareness for both the University and athletics department, promote the academic and athletic achievements of Samford, while using an obvious tongue-in-cheek tactic to differentiate Samford from a peer university located in Palo Alto, Calif.

"As a 1983 graduate of Samford, I would constantly have to explain to people that I went to Samford not Stanford," said Samford Director of Athletics Martin Newton. "Like many of our proud alums, I feel like Samford, similar to Stanford, is a world-class institution. With the help from our friends at Nike, we came up with a fun way to promote our University and create additional school spirit."

Starting Feb. 27, www.samnotstan.com will sell the Nike t-shirts for $25 plus a $5 shipping-and-handling fee. A United States map is incorporated into the website design that will change colors of each state where a t-shirt is purchased from Stanford red to Samford blue to show the country that we are #SAMNOTSTAN.

The campaign also includes an extensive social media presence. Fans are asked to take pictures of their t-shirts and post to their favorite social media platforms with the hashtag #SAMNOTSTAN.

An additional feature of the Website is an Instagram widget which will showcase users' pictures displaying the featured #SAMNOTSTAN hashtag. Promotional t-shirts have been sent to selected individuals with Samford and Stanford ties, as well as certain members of the national sports media.

The t-shirts will also be available at the Feb. 27 Samford vs. Appalachian State men's basketball game at Samford's Pete Hanna Center starting at 6 p.m. Tickets are available by calling (205) 726-DOGS or at www.SamfordSports.com/tickets.