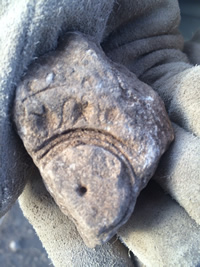 Samford University archaeologist James Strange and five Samford students are back in Israel this summer to continue work on the site of Shikhin, which yielded a number of exciting discoveries last year. In 2013 Strange and his team generated international media attention when they uncovered the remains of an unknown ancient synagogue in an unfamiliar Jewish village in Galilee.

This year's team is "learning what we can about Shikhin's residents, who are long gone and can only tell us their stories through the scraps we uncover of their workaday lives," Strange said May 28 in a post from Nazareth.

"Our job is to give them voices again, even if only whispers," he said.

The group is regularly updating information about their work at samfordsummerinisrael.blogspot.com/. Photos are being posted at facebook.com/groups/shikhin.

Strange is directing a crew of 20, which includes the Samford students and three graduate students from other schools. Motti Aviam, a professor at Kinneret Academic College on the Sea of Galilee, serves as co-director. They will work at Shikhin through June 23.

"Yes, students and volunteers pay a lot to come and work, but they also behave as if it is a pleasure to do so, and to do whatever is asked of them besides," Strange said.

Shikhin, near the ancient Jewish city of Sepphoris, is important because it teaches about Galilean Jewish village life and its economy at the birth of both Christianity and the Judaism of the Talmud, according to Strange. It is about five miles northwest of Nazareth.

Strange and his team began surveying Shikhin in 2011 and began excavations in 2012. Last year, in addition to the synagogue, they found massive evidence of pottery production and a large number of molds for making oil lamps.

Strange, who is associate professor of religion at Samford, has been going on archaeological digs since he was a sophomore in college. Even before that, as a child, he accompanied his father, also an archaeologist, on digs in the Middle East. He began the Samford in Israel summer program after joining the faculty in 2007.