Samford Launches Plan to “Shoe a Nation” in Dominica

Answering the challenge to take on a "God-sized goal," Samford University has announced it will provide shoes to the children of an entire nation. 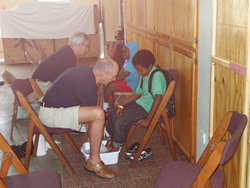 According to Samaritan's Feet founder Manny Ohonme, this is the first time any entity has partnered with the organization to provide shoes and other support for an entire nation. The Samford partnership is with the Caribbean island nation of Dominica.

Samaritan's Feet, a non-profit founded in 2003, is based in Charlotte, N.C., with global offices in Brazil, Nigeria, Peru and South Africa. Ohonme's goal is to provide shoes and "words of hope" to individuals in need, just as was provided to him by a missionary in his native Nigeria more than 30 years ago. Samaritan's Feet is not affiliated with the similarly-named Samaritan's Purse organization.

The Samford partnership was announced by Samford president Andrew Westmoreland at a March convocation where the speaker was Jim McCafferty, a member of the Samaritan's Feet board of directors. McCafferty is president of insurance operations for AAA Insurance and issued the "God-sized" challenge. Colin Coyne, Samford's chief strategy officer, is coordinating the Samford partnership with Samaritan's Feet.

The initial project in the partnership is to raise $100,000 to purchase up to 6,000 pairs of shoes for children in Dominica. The shoes will be distributed in conjunction with the 10thCaribbean Baptist Fellowship Youth Festival in July.

Dominica is in the Lesser Antilles region of the Caribbean and has a population of about 72,000. The economy is heavily dependent on tourism and agriculture.

Two major pledges already have been made to support the shoe project, Coyne said, with all donations totaling more than $31,000. This represents 1,860 pairs of shoes.  The Samford Sigma Nu chapter has also pledged to raise funds for an additional 1,000 pairs.

"Samford is uniquely qualified to take on such an audacious goal. This catalyses all elements of the university and allows us to fulfill our broad mission:  for God, for learning, forever," Coyne said.  "While shoes are the vehicle, our vision and commitment is broader than that."

"Having said that, by giving shoes we can eliminate an epidemic of unnecessary death," Coyne explained. "While washing the feet of these children and providing shoes, each child will feel the warmth and love of God's hand as they are ministered to by Samford students and Festival delegates."

In addition to the shoe project, Coyne anticipates that several academic departments and student groups will participate in other aspects of the Samaritan's Feet partnership. Samford's young alumni advisory board also will be supporting the partnership with fundraising.

Persons interested in the Shoe for a Nation project, including financial contributions, should contact Coyne at ccoyne@samford.edu. Contributions made to the partnership through Samford are 100 percent tax deductible. Gifts should be designated for Samford Shoes for a Nation.