Published on November 17, 2014 by Jimmy Lichtenwalter   Share this on: 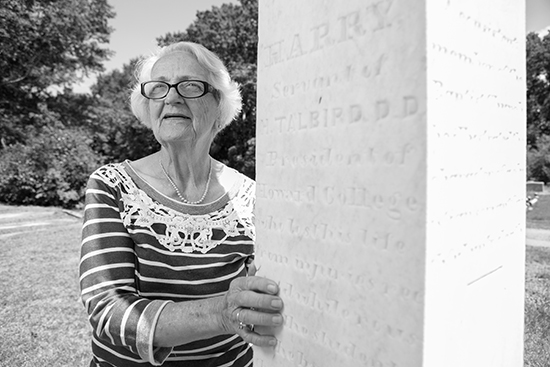 If you visit the second floor of Samford University’s Harwell G. Davis Library, it is hard to miss the large collection of portrait photographs on display. The photos show a variety of people and locations, and they are all accompanied by a number. This collection of pictures is an exhibit called “Faces of Marion.”

The exhibit is the result of over a year’s worth of work done by a Samford oral history class. The class traveled to Marion, Alabama—one of Samford’s previous homes before it came to its current location—and interviewed 25 citizens about their time in the town. The photographs were taken by Caroline Summers, Samford’s director of photographic services, and Jonathan Bass, university historian and history department chair. With assistance from Tim Wolfe, Samford’s academic grants officer, the project received a $2,000 grant from the Alabama Humanities Foundation. Wolfe noted that AHF grants can be difficult to obtain.

“Every person comes into the exhibit in three different ways,” said Wolfe. “They hear, they see and they read.”

The exhibit is designed to be used with a Smartphone-accessible website created by Samford computer science major Owen Wagoner specifically for this exhibit. The website aids patrons in their exploration of the exhibit. For each picture in the library, the website provides users with a recording of the interview, a transcript and further photographs.

“History is so much more than names and dates,” said Michelle Little, assistant university historian and one of the exhibit coordinators. “I hope that’s what people will get.”

The Faces of Marion exhibit will be at the Davis Library through December and then will relocate to Judson College in Marion. Visitors to the exhibit will need a Smartphone and headphones.