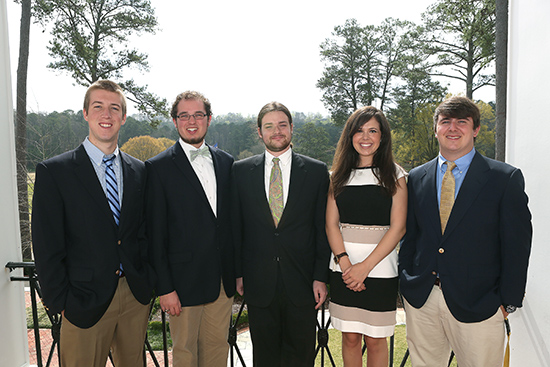 James Franklin Lowe, a junior history major from Fayetteville, Ga., won first place for his paper, "Albion's Abolition: The Moral and Public Campaigns that Ended Slavery and the Slave trade in Britain and British North America."  He received a $1,000 cash prize.

Clay Mapp, a junior history major from Greenwood, Miss., won second place and a $750 cash award for his paper, "Vigilantes of the Backcountry: the Regulators of South Carolina."

Sarah Grace Buckley, a senior history and journalism and mass communication double major from Florence, Ala., won third place and $700 for her paper, "The Parsons' Cause and Tactics of the Clergy and Anti-Clerical Groups: 1758-1766."

Baker Ellis, a senior history major from Danville, Ky., won fifth place and $250 for his paper, "The Forgotten Drama: the Burning of the Gaspee."

The award winners gave brief overviews of their papers at a luncheon at Mountain Brook Club on April 2.  The awards were presented by Samford history department chair Dr. Jonathan Bass. A bound volume containing the papers was dedicated to Birmingham Center awards committee chairman Grace Whatley. It will be housed in the Samford library.