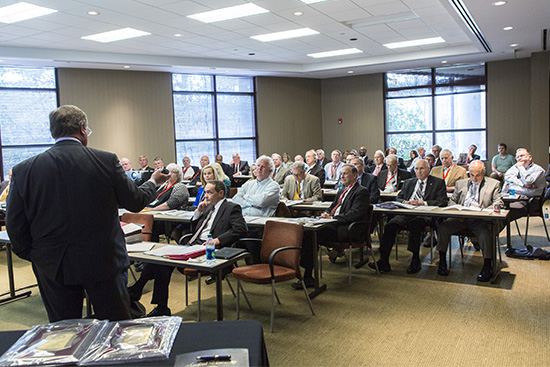 In an historic meeting Dec. 2, Samford University’s board of trustees gave official approval to the purchase of the Southern Progress Inc. (SPC) headquarters located adjacent to the university’s campus. The meeting, which was held at SPC, included a tour of the facilities for trustees.

The 28-acre property includes three buildings with 398,000-square-feet and more than 1,000 parking spaces. The sale is expected to close before the end of December, Samford officials said.

Harry B. Brock III, Samford’s vice president for business and financial affairs, said the university’s new College of Health Sciences would occupy two of the buildings, and Time Inc., the parent company for Southern Progress, will lease the third building and a parking deck for its Birmingham operations under a long-term agreement with Samford.

Brock and Samford President Andrew Westmoreland both emphasized that the purchase would provide much-needed space for the university’s future academic needs and anticipated enrollment growth with both existing and new programs within the College of Health Sciences.

Trustees also approved 300 candidates for December graduation, pending completion of degree requirements. Samford Provost and Executive Vice President J. Bradley Creed noted that this is one of “the most important actions” that trustees take and led trustees in a dedication prayer for the graduates.

William Lance Day, assistant librarian. Day has been the interlibrary loan assistant for Samford’s Harwell G. Davis Library since April. He has a master’s degree in library and information science from the University of Alabama.

Alan Blankley, chair and professor of accounting and management information systems. Blankley currently is associate professor at the University of North Carolina-Charlotte. He has an M.B.A. and doctorate from Texas A & M University.

Four new degree programs and one academic organizational change were approved by trustees.

A new Division of Career and Continuing Studies in the Orlean Bullard Beeson School of Education will include the Evening Studies Program, formerly known as the Evening College, and a still-developing online studies program to be known as Samford Online.

A bachelor of science in psychology degree will emphasize experimental areas of psychology and is intended to appeal to students who have an interest in the natural and computational sciences, as well as cognitive and behavioral science.

A new master of public health with concentration in nutrition degree program will allow students enrolled in the dietetic internship program to apply didactic and practice credits toward the master’s degree.

A new online master of science in health law and policy in Cumberland School of Law is geared to professionals in compliance, human resources, insurance and health care administration to gain a “marketable expertise in the increasingly complex world of health law and policy,” Creed said.

Three trustees whose terms expired were recognized for their service: David Belcher of Birmingham, Michael Dunn of Montgomery, and Charles Lancaster of Gadsden.