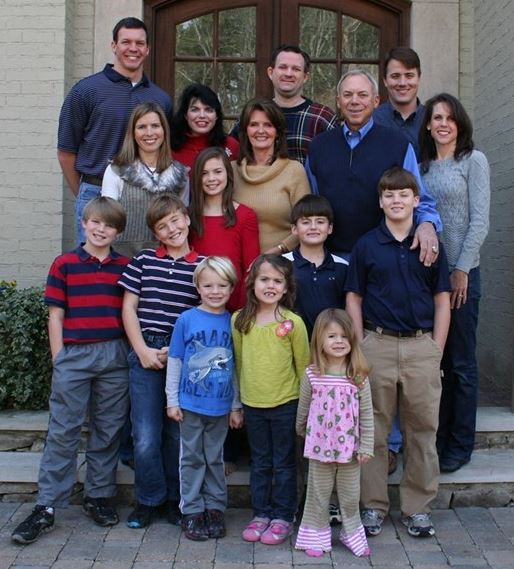 The building originally opened in 2009 as the Cooney Family Field House. The Sullivans will be honored in a ceremony officially changing the name prior to Samford’s homecoming game against Concordia College on Nov. 1. The name change was approved by the Samford University board of trustees.

“The placement of the Sullivan name to a building at Samford University affirms a family relationship that extends more than six decades,” Samford President Dr. Andrew Westmoreland said. “Beginning with Jerry Sullivan’s time here as a student-athlete through the involvement of Pat and Jean today in so many aspects of campus life, the family has been connected with Samford in ways far beyond letters on a building. This is a well-deserved tribute to their enduring commitment to Samford.”

The field house was originally named for Birmingham business executive and 1974 Samford graduate Gary Cooney and his family. Cooney, a long-time friend of Sullivan, gave the lead gift that made the building possible.

“I have always felt through athletics it is the relationships that will last for a lifetime,” Sullivan said. “My friendship with Gary Cooney began when we were teammates at John Carroll High School. Gary's generosity and the generosity of others enabled us to build this beautiful football facility.

“It is an honor to add my family's name to the Cooney Family Field House,” Sullivan said. “Gary is graciously including my family's name, along side of his, in honoring our past and future generations. This is very humbling and it makes me very proud.”

Sullivan is currently in his eighth season as the program’s head coach, and he ranks second in school history in career wins. In 2013, he led the program to its first Southern Conference title, reaching the NCAA Division I-FCS Playoffs for the first time since 1992.

In addition to his successes on the field, Sullivan has made a major impact on the lives of the players on his teams. Throughout his time on the staffs at Auburn, TCU, UAB and Samford, Sullivan has mentored young men for nearly 30 years.

“This rededication is a testament to the relationship between Pat Sullivan and Gary Cooney and their families” Samford Director of Athletics Martin Newton said. “This university is blessed to have the Sullivan and Cooney names associated with this facility, and it will serve as a reminder to everyone associated with Samford University of the importance of life’s relationships. This also re-emphasizes Coach Sullivan’s lesson to his players that relationships last for a lifetime.”

Sullivan, a 1972 graduate of Auburn, was a three-year starter at quarterback for the Tigers, earning the 1971 Heisman Trophy. He was also named an All-American and the SEC Player of the Year in 1970 and 1971. He helped lead Auburn to three post-season bowl appearances, and was named the MVP of the 1970 Gator Bowl and the 1971 Sugar Bowl.

Sullivan is a member of the halls of fame for the Senior Bowl, Gator Bowl, Sugar Bowl, Alabama Sports, National Football and National High School. In the spring of 2014, Sullivan was honored by the Auburn Alumni Association with its Lifetime Achievement Award.

“The Cooney family is honored to share the newly named Sullivan-Cooney Family Field House with our good friends Pat and Jean Sullivan and their entire family,” Cooney said. “We honor Pat for his integrity, his passion for his players and staff, his commitment to Samford University, his outstanding leadership qualities and accomplishments as an athlete, coach and mentor, and for being an extraordinary human being who has made a positive impact in the lives of so many people.

“Pat and Jean, you have given the bricks and mortar of this Field House its heart and soul,” Cooney said. “On behalf of the entire Cooney Family, thank you! We are ‘Cairde don saol’, or ‘Friends for life’.”

The 39,000-square-foot field house is located in the south end zone of Seibert Stadium. The building includes coaches’ offices, a locker room, meeting space, equipment storage and training facilities for football. An observation deck outside of the second floor offices overlooks Seibert Stadium.