Samford to Host Presentation on The Saint John’s Bible 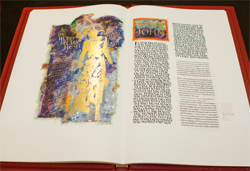 Samford University's Library is hosting an April 11 presentation on The Saint John's Bible Heritage Edition as part of its "Live @ the Library" series.  The limited edition manuscript will be on view at a reception and presentation 6 p.m. in Harwell G. Davis Library. The event is open to the public.

The Heritage Edition is a full-size fine art edition of the original Saint John's Bible, the first handwritten and illuminated Bible to be commissioned by a Benedictine Abbey since the advent of the printing press, according to Kimmetha Herndon, Samford's director of university libraries.

The original Saint John's Bible was commissioned in 1998 by the Benedictine monks of Saint John's Abbey and University with a mission to ignite the spiritual imagination of believers throughout the world and to illuminate the word of God for a new millennium.  A team of scribes, artists and craftspeople in a scriptorium in Wales under the artistic direction of Donald Jackson worked on The Saint John's Bible for more than 13 years. Herndon noted that Jackson is one of the world's foremost calligraphers and the scribe to Queen Elizabeth II's Crown Office at the House of Lords in London, England.

It is through the fine art Saint John's Bible Heritage Edition that individuals and artistic, religious and cultural institutions can intimately experience and share the inspiration, according to Eric Hollas, OSB, deputy to the president for advancement at St. John's University.

"The Heritage Edition provides an accessible link to the original artwork for those who wish to bring its beauty, spiritual and historic significance into their lives and the lives of others," Hollas said. "It is a work of art in its own right and ignites imagination as it imparts the word of God."

Saint John's conducted a worldwide search for the finest papermakers, printing experts and binders to create a printed work worthy of the original manuscript, Hollas explained. The best archival-quality 100 percent cotton paper, fade-resistant permanent inks and gold and silver metallic foils have been used to closely approximate the look and feel of the original. The edition is printed with a special printing technique using ultraviolet light. Each of the seven volumes that make up The Saint John's Bible is approximately 2 feet tall by 3 feet wide when open and weighs between 13 to nearly 20 pounds.

Only 299 sets of the Heritage Edition were created, and Samford University is the only location in Alabama to own a set.  The set was donated to Samford in 2012 by Jeff and Lori Northrup of Birmingham. All seven volumes will be on display before and after the presentation.