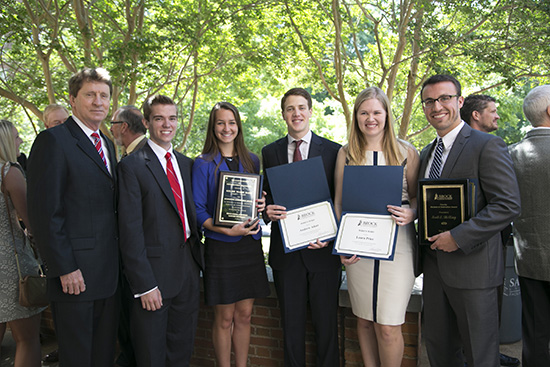 Samford University's Brock School of Business recognized students and an alumnus for academics, leadership and service in a May 16 ceremony during commencement weekend.

The students recognized at this annual ceremony go above and beyond to give back to their fellow students, the community and to the university while maintaining a high grade point average, according to Howard Finch, Brock School of Business dean. There were a number of students who were recognized for the involvement in professional organizations and societies, as well as awarded scholarships to continue learning at the master's level. In addition, there are several awards that recognize the top graduating seniors and they were bestowed the most distinguished awards given to students in the Brock School: The Distinguished Service Award, the Brock School of Business Student of Distinction Award and the John C. Pittman Award.

Three Distinguished Service Awards were given to a group of men and women who have set themselves apart from others in the area of service to both the university, the school and the community.

Drew Hall, a senior marketing major from Madison, Miss., served the university through leadership positions with Student Government Association (SGA), including terms as freshman class president, senator and vice president for development.  He also served on the Student Activities and Presidential Advisory Councils. He served on the Samford Student Recruitment Team and was a New Student Orientation leader and a Connections leader. During his first year, he started the "Follow a Freshman" blog which has morphed into the "Freshmen Stories" blog on the Samford website and has become a primary recruiting resource for the university. He served as president of Alpha Lambda Delta honor society and as philanthropy chair, Step Sing director and Relay for Life captain for Pi Kappa Phi fraternity. Within the School of Business, he served as a member of the Dean's Student Advisory Council and the American Marketing Association and was a finalist in the Regions New Venture Challenge. He also participated in service projects in the community, including a spring break mission trip to New York, as an Exceptional Foundation volunteer and as a 10th grade boys small group discipleship leader.

Danica  Grosko, a senior management major from Columbia, Tenn., served as vice chair of Gamma Sigma Alpha honor society and has participated in the Latin American Studies Scholars Program.  Within the School of Business, she served on the Dean's Student Advisory Council and created a business school volunteer program called Brock for Birmingham that partnered with Habitat for Humanity and worked to complete a house for a family in need. In addition, she volunteered extensively in the community with the Hispanic Interest Coalition of Alabama, and served as an ESL tutor at Shades Cahaba Elementary School and Baker Elementary School.

Kelsie Baer, a senior accounting major, served as a resident advisor with campus life for three years and was a member of a Campus Outreach leadership team. She was first violinist with the Samford Orchestra for two years. In the School of Business, she was president of Beta Alpha Psi honor society and was the featured student speaker at the 2013 Rite of Passage. In the community, she served as a tutor and an accounting volunteer at Restoration Academy and as a small group leader at The Church at Brook Hills. She served as a room leader at Campus Outreach's Beach Project in 2012 and has been accepted as a team leader for this summer. She has served on two mission trips, one for four weeks to Ukraine and another for five weeks to Thailand.

The Brock School of Business Student of Distinction Award went to Scott McKaig, a senior Brock Scholar from Fort Wayne, Ind. McKaig was involved in the University Fellows and Brock Scholars programs and was very active in the Brock School, the university and the community. He served as the business school senator with SGA and was a member of the finance committee. He also served as a Samford Ambassador for three years and was the recipient of the Omicron Delta Kappa Freshman Leadership Award, the Frances Marlin Mann Leadership and Character Award and was a representative to Teach for America's Lead Now Initiative. Within the Brock School of Business, he served with Students in Free Enterprise/Enactus on the finance committee and as treasurer and president. He developed the theme, recruited and oriented speakers, and coordinated all event logistics for TEDxSamfordU 2013. He also served as a member of the University Christian Fellowship leadership team and was co-director of the Birmingham chapter of Team Focus.  =n the community, he served as a tutor with local students who met at Team Focus, was a teacher in "Special Blessings," a program for developmentally disabled children at Mountain Brook Community Church, and was a volunteer soccer coach with Northstar Youth Ministries. Two years ago, he participated in a business consulting internship with the nonprofit American Helping Hands and then was one of  eight students employed to develop and implement a pilot financial literacy program for Regions Financial Corporation. Last summer he was a development/business intern with the Shyira Diocese in Rwanda.

One of the most prestigious awards at the Brock School of Business is the John C. Pittman Award, given to a senior who has exceptional combination of qualities in leadership, academic excellence and Christian commitment. This year's winner, Kaleigh Warwick, distinguished herself in many ways, Finch noted, through academics, leadership and involvement in both the school and in the community. She served as art director and page designer for Entre Nous, Samford's yearbook, and as president of Omicron Delta Kappa leadership honorary. She was a member of the Dean's Student Advisory Council for both the Brock School of Business and the School of the Arts. During her college career, she served in the SGA Senate and as a member of the Student Activities Council.  She served as an academic integrity advocate for the Francis Marlin Mann Center for Ethics and Leadership. She also served as president of both the American Marketing Association and the Kappa Pi International Honorary Art Fraternity.

In the community, she was a worship service speed painter for Brookwood Baptist Church, a marketing advisor and mentor to students with YouthServe Birmingham, and an art partner volunteer with VSA, the international organization on Arts and Disability. She co-founded Invest, a biblical fellowship group in the Brock School of Business that integrates faculty and students in faith and business through bi-monthly breakfast gatherings. She plans to work in business development with a nonprofit organization.

The Brock School of Business recognized Randy Freeman as Alumnus of the Year. A 1984 graduate of the Brock School, Freeman is chief financial officer for Brasfield & Gorrie, one of the largest privately-held construction firms in Alabama. Headquartered in Birmingham, the firm has approximately 2,600 employees at its offices in Alabama, Georgia, North Carolina, Tennessee and Texas.The firm's annual revenue is $2.3 billion. Freeman is a member of Samford's Board of Overseers and of the Brock School of Business Advisory Board.