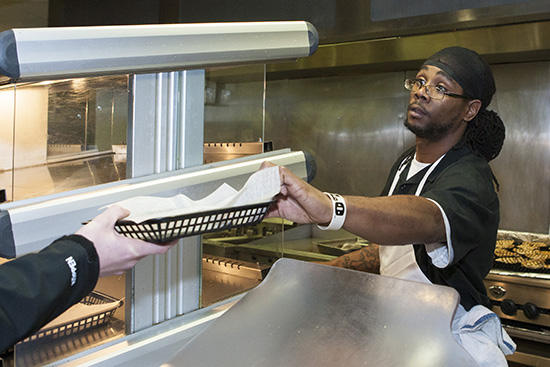 Random acts of kindness were everywhere on the Samford University campus Jan. 28-31 as the university responded to an unexpected winter storm that dumped several inches of snow on the Birmingham area.

Early predictions for a "dusting" of snow proved wrong. Snow began falling about 9 a.m. Tuesday, and by 11 a.m., university officials had closed the campus for the day. Snow and ice, coupled with traffic gridlock across the metropolitan area caused several hundred Samford commuting students and employees to be stranded on campus.

Samford's emergency response team worked throughout the day to provide services for the more than 2,000 residential students and those who were stranded.

An emergency shelter was set up in the gym in Seibert Hall with mattresses provided by the residence life office and towels for showers provided by athletics.

Facilities and public safety crews worked well into the evening on Tuesday and began again about 5:30 a.m. on Wednesday to clear campus roadways, building entryways and sidewalks. As of early Thursday, the Alabama Department of Transportation was advising motorists to stay off roadways to allow crews to treat and clear.

"Under the circumstances, I think we can be proud of the way the campus has responded," said Harry B. Brock III, the Samford vice president who convenes the emergency response team.

Throughout the day Tuesday and into Wednesday morning, the university community responded to needs in a variety of ways, many of which received extensive coverage on social media:

Also from Twitter: RT @mossrenie: Thank you @SamfordU students for walking around campus to offer extra blankets and pillows to stranded employees tonight!

Andy Parrish, general manager of Samford's WVSU-FM, did a live request show Tuesday night to help stranded listeners. At one point he played a Jeffrey Osborne version of "Baby, It's Cold Outside."

Samford officials said students and employees are making the best of the situation. "The spirit on campus has been good, and people continue to be cooperative and patient as we work through this emergency," said Randy Pittman, Samford's vice president for advancement. "It is just another example of the strong Samford community."

Conditions were improving by Thursday, and many stranded employees and students were beginning to head home. But, classes were cancelled again for Thursday and Friday because of concerns for travel and movement around campus. Officials said that also will gave adequate time to prepare the campus facilities and services to return to normal operations.