Westmoreland Outlines Why Samford Is Thriving to Business Network 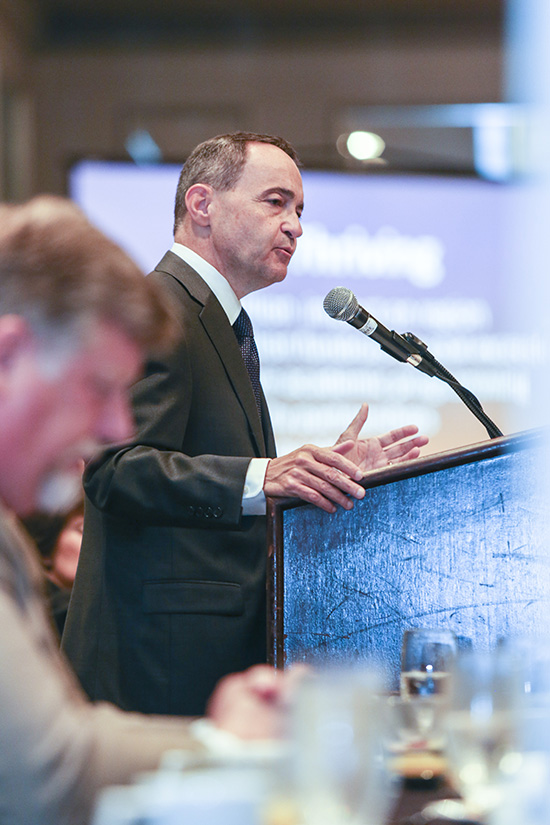 Samford University President Andrew Westmoreland told area business leaders that the primary reason the school is thriving in an age of uncertainty is its "irrepressible" approach to the challenges it has faced throughout its history.

Keynoting the Samford Business Network breakfast at the Wynfrey Hotel Sept. 3, Westmoreland recounted how a former Samford president, Maj. Harwell Davis, arrived in his office in 1939 and confronted “serious issues of the day,” which ultimately led to the campus being moved to its current location on Lakeshore Drive in Homewood, where it thrives today.

Westmoreland identified eight reasons why Samford is thriving although the times, especially economic, are difficult. “The new normal is ‘economic crisis’,” he said, citing student debt. “We need to develop new financial models.”

First among his list was the $335 million annual economic impact Samford is having on the state and region.

Second is the successful $200 million fundraising campaign completed in advance of its deadline, with more than 17,000 people contributing.

Among the other reasons cited for Samford’s current thriving are its innovative academic programming, particularly the new College of Health Sciences, and expanding online courses, especially in nursing.

The Samford president also cited community partnerships and nurturing quality, especially in academic standards for students, and recruitment of faculty and staff. He pointed to Samford’s continued record enrollment growth as evidence that the university is thriving.

Westmoreland made no apology for emphasizing Samford's faithfulness to its Christian mission. “At a time when many educators are running away from the issue, Samford is running toward it,” he said.

Westmoreland concluded his presentation by highlighting the growth and historical role of the business school, including a new $30 million building designed with the students and community in mind.

“We will continue our emphasis on student success, enhance our community involvement, extend our reach and assure our financial strength,” he said in closing.