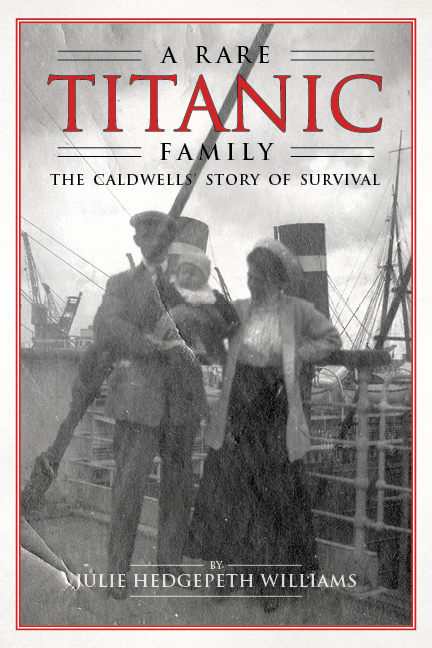 A Rare Titanic Family presents the true story of the professor’s great uncle and aunt—Albert and Sylvia Caldwell–and their 10 month-old baby Alden as they returned from a Presbyterian mission in Thailand. Williams speaks often about the book costumed as Sylvia Caldwell, as she did for Samford’s 2013 “Live at the Library” event.

At the Samford event Williams said that although it is not clear exactly why the Caldwell’s left Bangkok only two years into their seven-year commitment, Sylvia appears to have been so ill that she could not hold her baby. Seasick for a month on the small-ish ship that carried the family to Italy, she might not have been eager to immediately board the ship of the same size that was ready to depart for the U.S. from Naples.

The Caldwells instead held out for passage aboard a magnificent new (and sold-out) ship preparing to depart for the U.S. from England in only a few weeks. Luck was with them, it seemed, as someone else’s cancelled journey brought them second class tickets on the maiden voyage of RMS Titanic.

As the family boarded the doomed liner in Southampton, Sylvia asked a baggage handler the “unsinkable” question that elicited the now legendary response, “Yes, lady, God himself could not sink this ship.”

Albert busied himself shipboard by taking photos, even in the bowels of the ship’s engine rooms, where he struck up a friendship with the coal stokers. On the fateful night of April 15, Hedgepeth said, that chance encounter saved the family.

As the passengers crowded the decks of the stilled ship, Albert saw no panic among the crew and no signs that the ship might sink. Evacuation orders seemed alarmist, but when the stokers appeared on deck one recognized Albert and warned him, “if you value your life, get off this ship!”

Albert helped Sylvia into lifeboat 13 and was waved in himself when a crewman saw that Sylvia could not hold Alden. The lifeboat lowered roughly to the sea and the family watched the liner die from a half-mile away. “You just had to forget the screams or you’d go crazy,” Albert later told his great niece.

Adrift on the freezing water until dawn, the survivors finally saw a rescuing ship appear on the horizon. Other survivors already lined the decks of the vessel, checking each arriving group for family and friends. The Caldwells were among the rare families to escape intact and return to the U.S. aboard RMS Carpathia, the too-small ship they turned down in Naples.