Published on December 13, 2014 by William Nunnelley   Share this on: 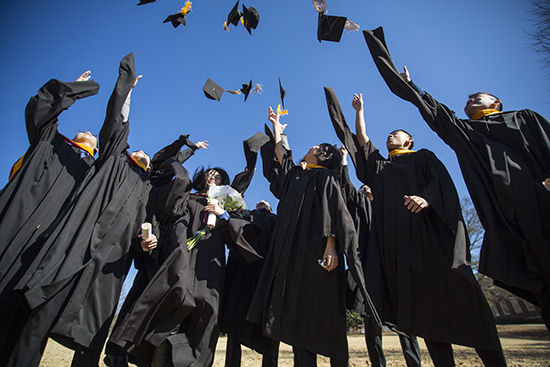 Samford University commencement speaker Matthew S. Kerlin told a class of about 318 Fall graduates that what the world needs is "a few billion normal people committed to making the world a better place."

Kerlin, Samford’s assistant dean of spiritual life and university minister, suggested to the graduates it was OK for them to be normal. "Statistically, most of you aren’t going to be exceptionally wealthy or famous or powerful." He spoke Saturday, Dec. 13, to an audience of about 2,200 in Samford’s Wright Center.

In a seven-minute talk entitled "In Defense of Normal," Kerlin said the world needs "a few billion normal people willing to live like Christ . . . willing to fight poverty and disease and racial inequality and violence . . people who love their families and their communities."

"And the sum total of all that normal would indeed be exceptional."

He said what the world needs now "is not a few more exceptional superstars trying to fix what is broken."

Kerlin told the seniors they should feel "no pressure to achieve the outlandish, or to live up to the nearly impossible expectations" they may have. "As a theologian, I believe that the meaning of life consists not in what you accomplish, but in what God through Christ has accomplished. This sets you free you to be faithful in the small things, to be kind when no one is watching, to be honest when it profits you nothing and to be hard working when nobody thanks you."

Samford President Andrew Westmoreland noted that Kerlin was speaking in place of Birmingham banking executive Donta Wilson, who was invited to speak but was unable to do so because of a death in his family. "I am deeply grateful to Dr. Matt Kerlin for his willingness to take on this important role," said Westmoreland.

As part of Commencement Weekend, graduates of Samford’s Ida V. Moffett School of Nursing received their nurse pins in a program Friday, Dec. 12. One member of the class, Kimberly Scott, received a big surprise when her husband, Army Capt. Stephen Scott, showed up at the ceremony. Capt. Scott had been deployed in Kuwait and, unbeknownst to his wife, had flown 27 hours to be at the program. Kimberly Scott said the moment was "overwhelming."

Also as part of Commencement Weekend, physics major David Brown was commissioned a second lieutenant in the U.S. Air Force as a graduate of Samford’s Air Force ROTC program. Brown has been selected for pilot duty and will attend training at Sheppard Air Force Base, Texas.