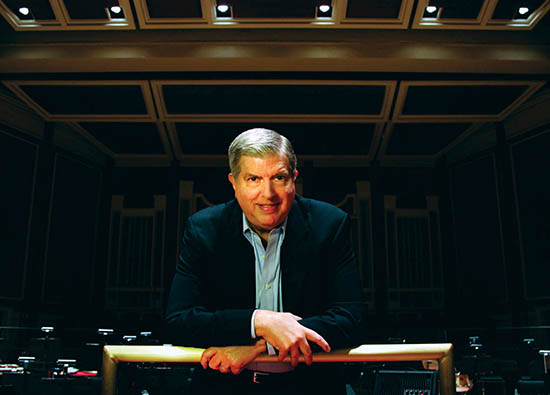 Tickets for this event range from $18-$30. Tickets can be purchased either online or by calling the Samford Arts box office at (205) 726-2853. Box office hours are Monday through Friday from 9 a.m. to 5 p.m. Tickets may also be purchased in person at the box office, located in Swearengin Hall on the Samford campus.

“One Singular Sensation” is a celebration of the life and work of Marvin Hamlisch, one of America’s most beloved composers and performers, according to Sean Wright, director of Samford’s Wright Center. Supported by a live band, four Broadway singers --Raymond Saar, Diane Ketchie, Joan Ryan and Scott Harlan--will tell stories about Hamlisch while singing his greatest hits. Songs include “The Way We Were,” “One,” “What I Did For Love,” “They’re Playing Our Song” and more.

Marvin Hamlisch was one of the most prolific and successful composers in history, Wright noted. One of only two men to win an Emmy, a Grammy, an Oscar, a Tony and a Pulitzer Prize, Hamlisch’s work has been cherished by multiple generations. From his groundbreaking work on the Broadway smash “A Chorus Line” through his scoring of such beloved films as “The Sting,” “The Way We Were” and “Sophie’s Choice,” among many others, Hamlisch brought together both tremendous skill and an artist’s soul. He delighted audiences with his original compositions and as a guest artist and conductor with multiple symphonies, including the Alabama Symphony Orchestra just before his death in August 2012.

Raymond Saar played Marius in the musical “Les Miserables” on Broadway and Enjolras in the Los Angeles production and was one of the featured soloists on the international cast album. Mr. Saar starred as Raoul for two years in Andrew Lloyd Webber's “Phantom of the Opera” in San Francisco and toured extensively with Sammy Cahn in his original musical “Words and Music.” He played Lun Thau in a national tour of “The King and I” starring Yul Brynner. He also portrayed leading roles in productions of “Hello, Dolly” with Martha Raye, “Guys and Dolls” with John Saxon, “Shenandoah” with John Raitt and “Applause” with Nanette Fabray.

Diane Ketchie made her Broadway debut in “Phantom of the Opera” and also starred in the San Francisco production of the same Tony award-winning show for two years. She made her New York recital debut at Carnegie Hall as a result of winning the Artists International annual competition. A wonderfully versatile artist, she has appeared as a guest soloist with the Houston Symphony, the Dallas Symphony, the Jacksonville Symphony, the Milwaukee Symphony, the Long Beach Symphony, the Charlotte Symphony, the Wheeling Symphony, the Pasadena Pops and the California Philharmonic in repertoire ranging from Mozart to Lloyd Webber.

Joan Ryan starred in the musical “Ruthless” on Broadway. She recently was awarded Broadway World’s Top Female Cabaret Artist of 2013. Ryan’s four-octave range has led to numerous leading roles in “Little Shop of Horrors,” “Joseph and the Amazing Technicolor Dreamcoat,” “Footloose,” “Nunsense” and the West Coast premiere of “Anyone Can Whistle.”  Television audiences know her from her role as Tina Pallodrino on the long running series “Saved by the Bell.” In addition to numerous commercials, pilots and television roles Ryan spent two years on “The Young and The Restless” and was featured on “The Today Show” and “The Tonight Show."

Scott Harlan has been seen in Los Angeles with Carol Burnett in the world premiere of the new musical, “From the Top” and in the new musical “Radio Gals,” a role he repeated at the Coconut Grove Playhouse in Miami. Prior to that, Harlan appeared in the national companies of “Do Black Patent Leather Shoes Really Reflect Up?” and “The Rocky Horror Show.” Regionally, Harlan was seen in Des McAnuff's production of “80 Days” at the La Jolla (Calif.) Playhouse, appeared as Sancho in “Man of La Mancha” with Jon Cypher and as Mr. Bumble in “OLIVER!”

The Wright Center Signature Series is made possible through the support of the National Endowment for the Arts, South Arts and the Alabama State Council on the Arts.  Samford University is a partner of the Cultural Alliance of Greater Birmingham.