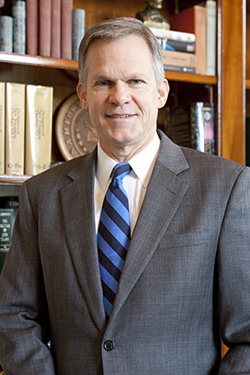 During a special called meeting Jan. 2, the Campbell University board of trustees unanimously approved the selection of Samford University Provost and Executive Vice President J. Bradley Creed as Campbell’s next president. He will succeed Jerry M. Wallace, who will step down June 30 following 12 years as president.

Creed has served as Samford’s chief academic officer since 2002 after serving as associate provost for one year.  When he assumes the presidency July 1, he will become just the fifth president in Campbell’s 128-year history. Campbell is located in Buies Creek, North Carolina, near Raleigh, and has historic ties to North Carolina Baptists.

“It has been an honor to work alongside Dr. Creed during the time that we have served together at Samford, and I have counted him as a valued friend and confidant,” said Samford President Andrew Westmoreland. “His positive contributions to the academic environment of the campus will be cherished for decades to come, as will the many friendships that Brad and Kathy have nurtured here.  Our sadness at the departure of the Creed family is tempered by our enthusiastic support for them as they move to positions of leadership at Campbell University.”

“We are excited about the new challenge and opportunity at Campbell University, but we have mixed emotions about leaving Samford,” Creed said. “We have come to love this place over the last 13 years, and this community has loved us in return. We are grateful for the things that we’ve been able to accomplish together, and we will always be grateful for the professional and personal relationships we found here. Our lives are better for it.”

Prior to coming to Samford, Creed was professor of Christian history, associate dean and dean at the George W. Truett Theological Seminary of Baylor University in Waco, Texas. He has also served as the scholar-in-residence at the Baptist Joint Committee on Religious Liberty in Washington, D.C., and visiting professor of Church history at the John Leland Center for Theological Studies in Falls Church, Virginia.  Earlier he was pastor of churches in Texas and Louisiana.