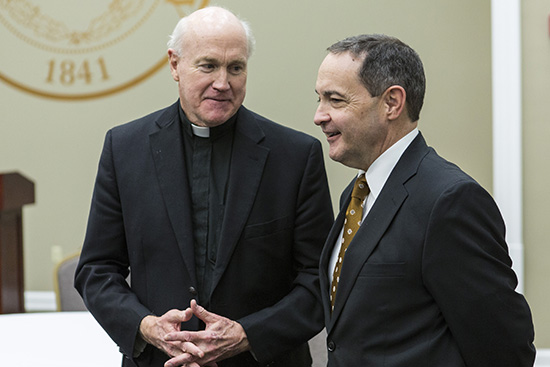 A $500,000 gift has made it possible for Samford University to fully endow a fund that will enhance its involvement with Birmingham's Holy Family Cristo Rey High School (HFCR).

The interest that spins off the endowed fund will allow about five students from the Catholic high school to be interns at Samford each year, according to Samford advancement officer Stacy Gay. “This is a wonderful gift and will be a great investment for the Samford community,” Gay said. The gift’s donors wish to remain anonymous.

Representatives from the university and the high school gathered at Samford on Wednesday, Jan. 21, to acknowledge the gift and what it means for HFCR interns who work at Samford each Friday during the school year.

“We celebrate one of the best partnerships we have at Samford, the generosity of friends who have given sacrificially for this cause and those who will do likewise in the future,” said Samford President Andrew Westmoreland.

He thanked faculty and staff for embracing the program and doing “all they could to make sure that we did it right” when Samford welcomed the first HFRC student interns in 2011.

HFCR President Alex Steinmiller thanked Samford for its involvement. “We’re proud and grateful for Samford University and for people who open doors to the underserved,” he said, noting how Samford has seized the “mentoring opportunity.”

“We all have the Holy Spirit in common,” said Steinmiller, calling the relationship between the two schools a great step in breaking down walls. “It is generosity through the Holy Spirit.”

HFCR, located in Ensley in western Birmingham and one of the oldest Catholic schools in Alabama, is a part of the national Cristo Rey Network.  In that model, corporate partners provide paid internships that pay 70 percent of a student’s tuition at the private school. In turn, students spend one day a week at a sponsor’s work site.

In a win-win relationship as a corporate sponsor, Samford gets the benefit of good high school student workers. In turn, HFCR students gain valuable experience and training and a unique introduction to a college campus.

A third recent HFCR graduate, Raven Hill, will enroll as a freshman this spring semester. For the past several years, Hill has worked each Friday in Samford’s Brock School of Business offices assisting professors, making photo copies and learning valuable computer skills. She also learned a lot about a campus environment, she said.

“My first goal is to maintain a great grade point average,” said Hill, who is excited to move into a dorm and meet her roommate.

McWhorter School of Pharmacy professor P.J. Hughes oversees Pegues’ work.  “We appreciate her youthful spirit.  We gain as much from the experience as she gains,” said Hughes, who underscores the giving back aspect of the partnership.

“It’s a wonderful opportunity to give back to our community and to pay it forward,” said Hughes, noting the varied academic areas that host the students.  “The partnership is all across campus. Many departments support the program in some way.” The campus dining service, for instance, provides complimentary Friday lunch for the student interns.

The high school was founded in 1943 by the Congregation of the Passion to provide college preparatory education in a Christian environment. In 2007, it became a part of the Cristo Rey Network, which includes 28 schools across the nation.