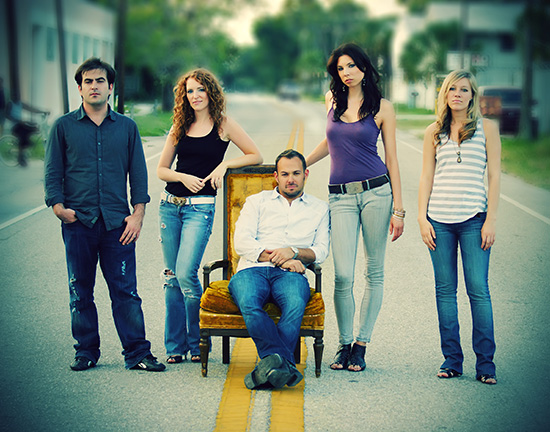 Tickets are $20 and are free for Samford students and employees. Tickets can be purchased either online or by calling the Samford Arts box office, (205) 726-2853. Box office hours are Monday through Friday, 9 a.m.-5 p.m. Tickets may also be purchased in person at the box office located in Samford’s Swearingen Hall.

SYBARITE5, the first string quintet to ever win the Concert Artists Guild International Competition, has made its name by blurring classical and rock motifs, earning praise from critics and audiences.

Playing a repertoire that ranges from Mozart to Radiohead, SYBARITE5 utilizes exquisite musicality and a dynamic performance style to turn heads throughout the music world and break the boundaries of what a string ensemble can be. The Arizona Daily Star stated of their performance, “Expect an experience that will satisfy your inner rock star and your secret Mozart.”

The quintet’s debut EP, “Disturb the Silence,” featuring music by Radiohead, Piazzolla and original works written for SYBARITE5, was self-released in 2011 and quickly reached the top 10 on the Billboard charts. The group’s follow-up CD, “Everything in its Right Place,” is a continuation of the Radiohead Remixed Project and was released in November 2012 at Carnegie Hall on CAG Records.

The Feb. 6 performance at Samford is the culmination of a four-day residency working with local music composers and students, according to Cristina Almanza-Muro, director of external relations for the Wright Center.

The program will feature the world premiere of the winning piece of New Music Idol, written by a Samford composition student. On Feb. 5 eight Samford students and alumni will compete to have their compositions played by SYBARITE5.  As part of the New Music Idol residency with SYBARITE5, the selected students will work with the string quintet and have their compositions performed live at the New Music Idol Concert.  Similar to the famous television show “American Idol,” the event will feature a panel of four judges including Alison Bolton, director of artistic operations and education for the Alabama Symphony Orchestra; “The Queen of Clean” comedienne Joy; and Burgin Mathews from Birmingham’s Mountain Radio’s “The Lost Child.” The attending audience members will text to vote for the piece they liked the most, and the winning composition will be premiered at SYBARITE5’s main concert Feb. 6. The Feb. 5 concert is at 7:30 p.m. in Harry's Coffeehouse in Samford's Beeson University Center. That event is free to the public but reservations are highly recommended.

The quintet begins its residency with three days of activities Feb. 3-5 in Birmingham, including a lecture/demonstration to children at the YMCA of Greater Birmingham. “We are very proud to be part of SYBARITE5’s outreach to communities that otherwise would not be exposed to performances of string artists like SYBARITE5,” said Almanza.

The Wright Center Signature Series continues Feb. 26 with Mnozil Brass, “the most entertaining brass ensemble on the planet – according to our music director of graduate studies, Demondre Thurman,” Almanza added.

The Signature Series is made possible through the support of the National Endowment for the Arts, South Arts and the Alabama State Council on the Arts. Other event sponsors include Weld for Birmingham, Birmingham Mountain Radio, Yelp! Birmingham and Taziki’s Mediterranean Café. Samford University also is a partner of Create Birmingham.