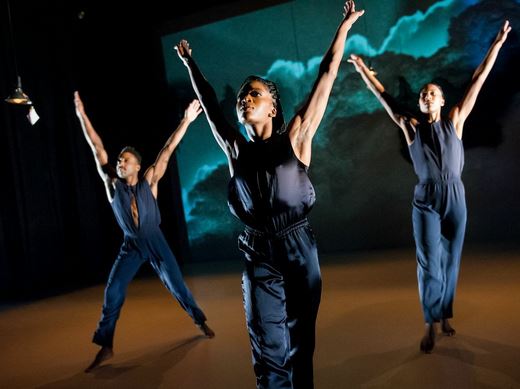 A community forum with Maritza Mosquera and the company will follow after the performance. This production is co-presented with the Alabama Dance Council as part of the annual Alabama Dance Festival.

Tickets range from $15-$25 and are free for Samford students and employees. Tickets can be purchased either online or by calling the Samford Arts box office at (205) 726-2853. Box office hours are Monday through Friday, 9 a.m.-5 p.m. Tickets may also be purchased in person at the box office located in Samford’s Swearingen Hall.

Kyle Abraham is one of the fastest rising stars in the modern dance world, in demand as a performer, choreographer and collaborator. Abraham received a MacArthur Foundation Genius Grant and has been cited for his “breathtaking skill as a performer” and his dance vocabulary “that reflects youthful energy…and a strong grounding in modern technique,” according to Sean Wright, former Wright Center director.

The New York Times called Abraham “a dynamic performer… his material is combustible.” In November 2012, he was named the newly-appointed New York Live Arts Resident Commissioned Artist for 2012-14.

Following up on his 2013 performance of “Pavement,” Abraham brings his company back to the Alabama Dance Festival with a brand new work. “When the Wolves Came In” explores the historical legacy of two totemic triumphs in the international history of civil rights: the 150th anniversary of the Emancipation Proclamation and the 20th anniversary of the abolishment of apartheid in South Africa. The works take their inspiration from Max Roach’s 1960 protest album “We Insist: Max Roach’s Freedom Now Suite,” which celebrated the centennial of the Emancipation Proclamation and shed a powerful light on the growing civil rights movements in South Africa and the U.S. The potent themes inherent in these historical milestones are evident in Abraham’s choreography, evocative scenery by visual artist Glenn Ligon, the visceral power of Roach’s masterwork and original compositions of Grammy Award-winning jazz musician Robert Glasper, Wright noted.

The Alabama Dance Festival will be held Jan. 9-18 and is presenting Kyle Abraham and Abraham-in-Motion in partnership with Samford as the guest company-in-residence.

“The Festival offers a variety of performances and classes for all ages and levels,” said Rosemary W. Johnson, Alabama Dance Council executive director. Whether you are a seasoned professional, student dancer or an enthusiastic audience member, there is something for everyone.”

In addition to classes for professional, college and pre-professional dancers, the Alabama Dance Festival will direct outreach activities with Abraham-in-Motion across the state of Alabama. The company begins its residency with three days of activities Jan.5-7 in Montgomery, including a lecture/demonstration at Alabama State University.

“We are very proud to be part of the Alabama Dance Festival and offer outreach to communities that otherwise would not be exposed to performances and living artists like Kyle Abraham,” said Cristina M. Almanza, Wright Center director of external relations.

The Wright Center Signature Series continues Feb. 6 with Sybarite5, one of the hottest names in classical crossover music, Almanza added.

The Signature Series is made possible through the support of the National Endowment for the Arts, South Arts and the Alabama State Council on the Arts. Samford University is a partner with Create Birmingham.