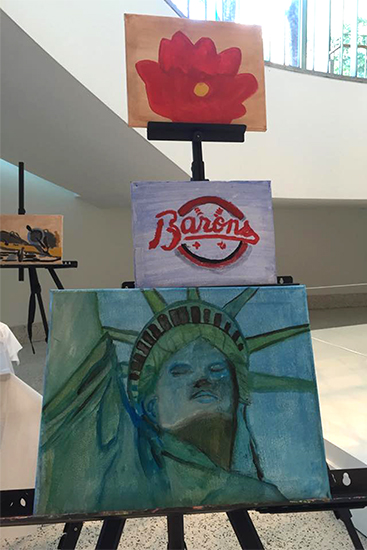 A Samford University student team partnered with Neighborhood Housing Services of Birmingham (NHSB) at the beginning of February to launch a month-long awareness campaign called Unlock Birmingham. The campaign seeks specifically to make people in Birmingham aware of affordable housing opportunities, specifically those established by NHSB.

According to the National Low Income Housing Coalition 2014 Out of Reach Report, “In the United States, the 2014 two-bedroom Housing Wage is $18.92. This national average is more than two-and-a-half times the federal minimum wage, and 52% higher than it was in 2000. In no state can a full-time minimum wage worker afford a one-bedroom or a two-bedroom rental unit at Fair Market Rent.”

NHSB realizes Birmingham is not immune to that problem, and since 1970, the organization has striven to help stabilize urban neighborhoods by promoting financial empowerment and homeownership. It offers options primarily for working families whose household income is too much to qualify for subsidized housing but not enough to afford housing at current market rates.

The students – Cameron Cross, Bailey Fuqua, Corry Mulligan, Taylor Pigman and Cassady Weldon -- served lunch at the Firehouse Shelter in downtown Birmingham, hosted an art exhibition at the Birmingham Museum of Art and promoted NHSB’s services at a Samford University basketball game. The team has also put on some smaller awareness events throughout the month.

Birmingham City Schools’ John Herbert Phillips Academy partnered with Unlock Birmingham to create the exhibition at the Birmingham Museum of Art.   Kindergarten through eighth grade students painted canvases for the display as part of a class project in which they were asked by the Unlock Birmingham team to paint the things they love most about Birmingham. Twenty of the canvases were displayed at the museum on Feb. 19.

“The students did a terrific job painting the canvases, and their involvement with the campaign will go a long way for the city of Birmingham,” Fuqua said. “Our goal with the exhibition was to show off the talent of some of Birmingham’s finest young students while also bringing attention to affordable housing options in the very city painted on each student’s canvas.”

The Unlock Birmingham team also displayed the canvases in the Pete Hanna Center before and during the Feb. 21 Mercer vs. Samford men’s basketball game. The canvases were originally set to be displayed earlier that day at the Samford baseball game, but due to inclement weather the display was moved inside to the site of the basketball game.

“Whatever the students do, they want it to promote Neighborhood Housing Services and the excellent programs and opportunities of the organization,” Unlock Birmingham faculty advisor Betsy Emmons said. “I believe every Unlock Birmingham event from the Firehouse Shelter to the basketball game has helped people connect with NHSB.”

The team has also passed out key necklaces to people around the city over the course of the campaign. These keys are symbolic of the opportunities provided by NHSB which can empower individuals to find financial stability and unlock affordable housing.

“From now on, any time people see one of our key necklaces or maybe even just a key in general, we hope they will be reminded that finding affordable housing is not as difficult as they might have thought,” Fuqua said. “NHSB can help give people the keys they need to achieve long-term financial stability.”

Corry Mulligan is a junior journalism and mass communication major and wrote this story for Samford’s Office of Marketing and Communication.