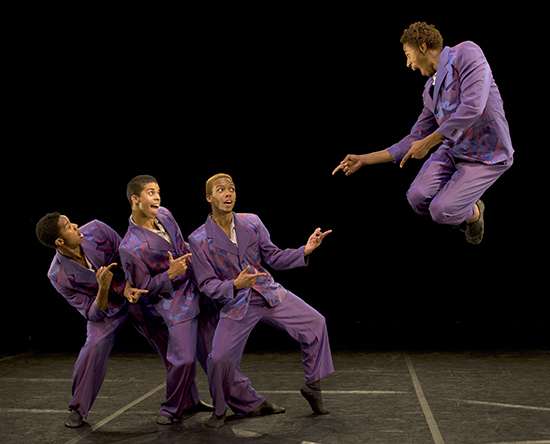 The Eisenhower Dance Ensemble celebrates the music that made Motown famous in a razzle-dazzle evening of music and dance. Under the leadership of artistic director Laurie Eisenhower, Motown in Motion is a “playfully humorous and theatrical event of dance and music” that salutes such legendary artists as The Temptations, Marvin Gaye, Gladys Knight, Smokey Robinson, Michael Jackson, The Supremes and Stevie Wonder.

Eisenhower Dance has spent the last 23 years performing the repertoire of internationally known choreographers, as well as the highly acclaimed work of Eisenhower. Established in Detroit by Eisenhower in 1991, the company presents an annual subscription series and tours internationally. The company has performed works by choreographers David Parsons, Lar Lubovitch, Ron de Jesus, Michael Foley, Gina Patterson, Lauren Edson and Harrison McEldowney, among many others. The company’s mission of collaboration has resulted in performances with the Michigan Opera Theatre, the Great Lakes Chamber Music Festival, the Warren Symphony, the Immigrant Suns, Detroit Chamber Winds & Strings, the Rackham Symphony Choir, the Motor City Lyric Opera and the Toledo Opera. Motown in Motion is the result of several full-evening touring productions produced by the company.

The presentation begins March 1 with a four-day residency involving local dancing communities and a school performance.

“We are very proud to be part of SouthArts Dance Touring Initiative. Their support will allow a lot of Birmingham children to enjoy a dance performance that otherwise they would not be exposed to,” said Cristina M. Almanza, Wright Center director of external relations.

Eisenhower Dance Motown in Motion is part of the Dance Touring Initiative bringing the best in modern dance to the Southeast. The Samford performance is funded in part by a grant from SouthArts in partnership with the National Endowment for the Arts and the Alabama State Council on the Arts. Event sponsors include Weld for Birmingham, Birmingham Mountain Radio, Yelp! Birmingham and Taziki’s Mediterranean Café. Samford University is a partner with Create Birmingham.