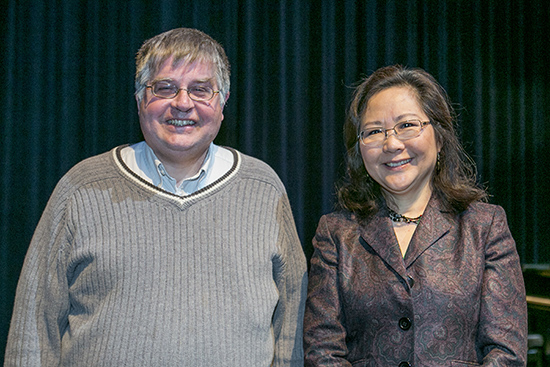 Samford University professors Moya Nordlund and Steven Epley received top university awards during the 2015 spring semester opening convocation on Tuesday, Jan. 27. Each has taught at the school for more than 20 years.

Nordlund, chair of academic studies in the School of the Arts’ Division of Music, received the George Macon Memorial Award for outstanding performance as a teacher, counselor and friend who inspires greatness in students.

Epley, professor of English in Howard College of Arts and Sciences, received the Jennings B. Marshall Service Award for significant and sustained service contributions to the university.

Creed also recognized geography professor Eric J. Fournier, who in November was named the 2014 Alabama Professor of the Year by the Carnegie Foundation for the Advancement of Teaching.

Nordlund, said Creed, fulfills every aspect of the criteria for the Macon Award, which celebrates the enduring influence that a teacher can have on students and encourages an appreciation of the profound significance of being called to teach.

“She demonstrates extraordinary commitment to her students as she sets rigorous standards and expects that the students will be able to meet and exceed these standards,” Creed said of Nordlund, who oversees the music division’s academic curriculum and teaches and advises music education students.

Nordlund counsels struggling students and devotes extra time to help them understand the material and be successful in their course of study, Creed said.

Her students have achieved success as teachers and performers wherever they go, Creed said, and her outstanding teaching and professional reputation has resulted in unprecedented placement of Samford’s music education graduates in teaching positions. “Very near 100 percent for the past 10 years,” he noted.

Creed cited Epley for his service and leadership in many areas of campus life. Epley has been chair and secretary of the faculty senate, chair of the learning resources committee and a member of the faculty/trustee ad hoc committee on faculty governance.  He has served on the university’s values council and on various academic, athletic and business committees. The sports enthusiast has also been a scorekeeper at Samford basketball games.

“He is beloved by his students, our alumni and his colleagues,” Creed said of Epley, who teaches cultural perspectives, British literature, senior thesis and medieval literature. He is a specialist on 18th-century novelist and educator Susanna Rowson.

“When we think of him, we think of kindness, good humor, dedication to Samford, love for teaching and quiet, unassuming, faithful service,” Creed said.

Epley joined the Samford English faculty after an early career as a reporter for his hometown paper, The Chattanooga News-Free Press in Tennessee. He holds a bachelor’s degree from the University of Tennessee at Chattanooga and master’s and Ph.D. degrees in English from Columbia University.

The convocation was the first such opportunity to recognize Fournier since he received his Carnegie award at the National Press Club in Washington, D.C. The U.S. Professors of the Year program salutes the nation’s most outstanding undergraduate instructors who excel in teaching and positively influence the lives and careers of students.

A Samford faculty member since 1997, Fournier served as geography department chair for 12 years.  He was recently named director of Samford’s Center for Teaching, Learning and Scholarship.

Following the awards presentations, Creed gave an address based on Psalm 1.  The topic was chosen to kick off the spring convocation series that will focus on the Psalms.