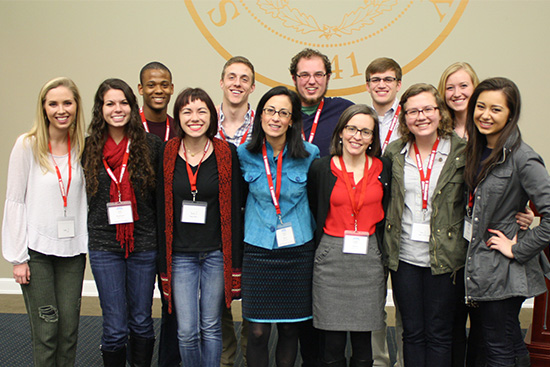 The event featured two keynote speakers, Stephen Black, founder of Impact Alabama and director of the Center for Ethics and Social Responsibility at The University of Alabama at Tuscaloosa; and Khadijah Abdullah, executive director of Teach for America, Alabama.

During the workshop, attendees participated in a StrengthsQuest Program training which evaluated their personal strengths and how they can be utilized in leadership positions. The ODK members also engaged in conversation about leadership development, ODK circle standards and ways to enhance their own circles.

“It was great to see students bounce ideas off one another and share how ODK has impacted their campus, said Samford’s ODK president John Hunsicker. “After this conference, Samford's circle has been equipped with great ideas for the future.” Hunsicker is a senior biology major from St. Louis, Missouri.

ODK is the nation’s oldest leadership honor society and has initiated more than 300,000 members in its rich 100-year history. Leaders in ODK are recognized for their academic achievements as well as their leadership across five aspects of campus life including scholarship, athletics, campus or community service, social or religious activities, and campus government, journalism, speech and the mass media, and creative and performing arts.

The national leadership honor society is active on more than 285 campuses across the United States.

Samford’s circle of ODK was established April 6, 1951. The organization currently has 93 members.