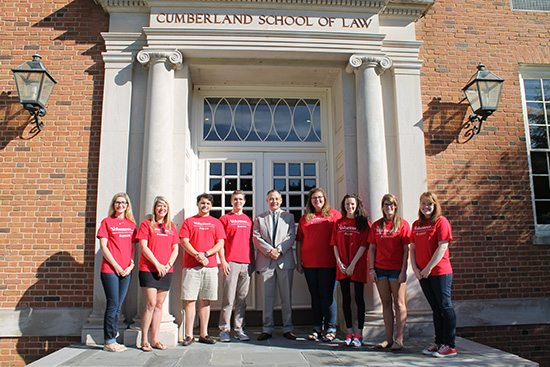 This academic year, the CPICS has delivered more than 1,000 hours of community service to Jefferson County residents. The year began with the annual 1L Service Project, in which 90 percent of the incoming class served at five locations throughout Jefferson County, donating over 500 hours of service. In October, the CPICS participated in Alabama’s 2014 Pro Bono Month, hosting five local events at the law school. For the first time this year, the CPICS participated in four Alternative Spring Break activities, hosted at four different homeless shelters in Jefferson County.  The CPICS also hosted CASA Christmas, a fundraising drive for children in the care of the Court Appointed Special Advocate (CASA) program, and hosted a kickball tournament benefiting CASA children and their caregivers. The year culminated with Project Homeless Connect, in which students, alongside volunteer attorneys, provided free legal assistance to more than 300 people.

“It has been my pleasure to work with this organization and to support their ideas and enthusiasm. The students are motivated, energizing and committed to delivering high quality pro bono legal services to those in need,” said Cassandra Adams, director of the Cumberland Community Mediation Center and Public Interest Project. “Receiving this award is an honor, as it recognizes the work that these students are doing and will continue to do when they become members of our Alabama State Bar.”

Award categories include individual attorney, law student, mediator and firm/group. The mediator award recipient, Jana Garner, is a 1997 Cumberland School of Law graduate. The awards are intended to “recognize the outstanding pro bono efforts of attorneys, mediators, law firms and law students who are actively donating time to the civil representation of those who cannot otherwise afford legal counsel and to recognize individuals who encourage greater legal representation in and acceptance of pro bono cases.”

The 2015 Alabama State Bar Pro Bono Awards will be presented at the Bench and Bar Luncheon July 16 during the state bar annual meeting.