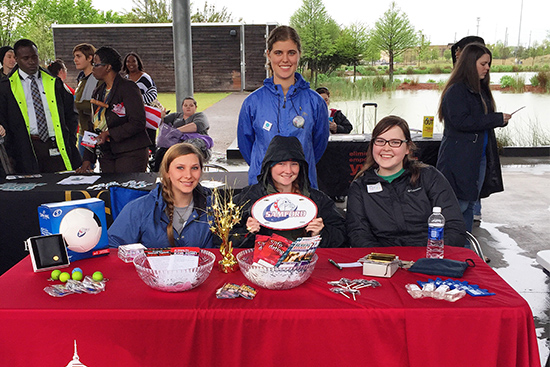 Samford University was one of several organizations participating in an April 16 event at Birmingham’s Railroad Park to encourage college students to help end domestic and sexual violence on college campuses. The event, Loud & Clear, featured two-time National Poetry Slam champion Guante and student leaders who spoke out about the need to end sexual violence in Birmingham.

Local schools Samford University, University of Montevallo, Miles College, University of Alabama at Birmingham and Birmingham-Southern College were joined by several nonprofit organizations including the Crisis Center Inc., Rape Response, Safehouse and the YWCA Central Alabama to host the event. This was the first year for Loud & Clear to take place.

“None of us can do this alone,” said Allison Dearing, campus coordinator for the Crisis Center Inc.  She said student involvement is vital to raising awareness and ultimately ending sexual assault and domestic violence on college campuses.

Attendees also had the opportunity to enter raffles, win prizes and participate in games and other activities.

Organizers said there are already plans in place for another Loud & Clear event next year.