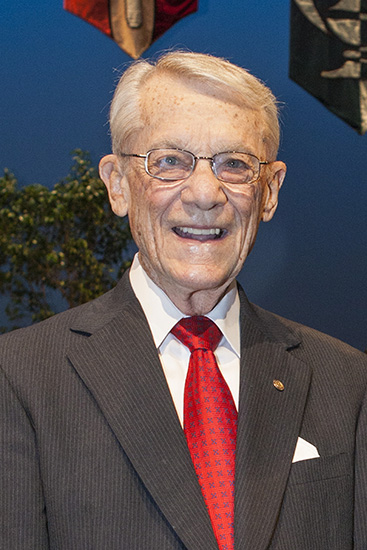 John Cobb Pittman of Birmingham, who served on the Board of Trustees of Samford University for 62 years, died April 25, 2015.  He was 92.

He was a 1944 graduate of Samford, where he met his wife, Marjorie Holcomb Pittman, who died in 2007.

Pittman’s long career as a life insurance executive began soon after his service as a U.S. Marine on Okinawa during World War II. A producer, general agent and managing partner with New England Mutual for 32 years, he completed his career with the company as a senior regional vice president. He qualified multiple times for the Million Dollar Round Table.

During his tenure on Samford's board of trustees, he served in many positions, and was its chairman twice.

The John C. Pittman Spirit award was established in 2004 to honor his 50th anniversary as a Samford trustee. The annual award recognizes a graduating senior who has exhibited serious commitment to being a student, honoring Christ, maintaining personal health and involvement in student life.

He was a founding member of Brookwood Baptist Church, where he was chairman of the Board of Deacons and a longtime Sunday school teacher. His community and civic causes included the United Way, which he served as campaign chair in 1986. He was an avid golfer and bridge player.

“Finding one word to encompass the qualities of John Pittman would be an impossible task, but if pressed to offer one word, I would choose ‘faithful,’” said Westmoreland.

“I don’t know how Samford University could ever, regardless of how long the institution may stand, have a more faithful friend than John Pittman.  We mourn the loss, but we celebrate the victory.”

A memorial service will be held Thursday, April 30, at 3 p.m. at Brookwood Baptist Church.  Visitation with the family will be from 1:30 to 3 p.m.