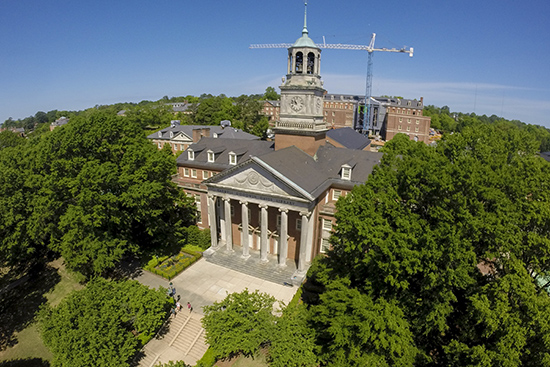 Samford University’s board of trustees took a number of significant actions during their regular spring meeting April 28, including the approval of several new programs, new faculty and the candidates for graduation.

Trustees approved 1,059 candidates for graduation in May, pending completion of graduation requirements. Samford Provost J. Bradley Creed reminded the board that “this is one of the most important things that trustees do” because the university’s “main purpose is to educate the students for their futures.” Creed then led trustees in a prayer of dedication and blessing for the graduates.

Bachelor of science in public health, a new major with a “broad and rigorous sequence” of courses in public health and the ability to implement a health project, health communication skills and an understanding of health systems.

Master of public health with a global health concentration, designed for students who want to pursue careers in global public health. Creed noted that this is a new concentration within a previously approved degree program.

Master of science in design studies, an online program for 24 months of advanced study with an emphasis on design, research and teaching. This program is housed in Samford’s Department of Interior Architecture.

Bachelor of arts in law, politics and society, an interdisciplinary concentration focused on the role of law in local, national and international society and intended for students interested in law-related fields.

Bachelor of science in criminal justice, a new degree program in the university’s Evening College for students interested in the administration of public law enforcement and corrections agencies.

Susanne Finch Burgess, associate professor of music. Burgess earned her doctorate at the University of Tennessee, where she has been director of music education and assistant professor at the Southeast Center for Education in the Arts since 2000.

Miriam Gaines, instructor of nutrition and dietetics. She was nutrition and physical activity division director for the Alabama Department of Public Health from 1994-2013.  Gaines’ graduate degree is from Auburn University.

Ashley George, assistant professor of communication studies. George has been on temporary appointment at Samford this year and is joining the faculty full time. She received her doctorate from the University of Alabama.

Michelle Newberry, instructor of accounting. Newberry has a master’s degree from the University of Alabama and currently is an adjunct instructor at Samford.

Frank Patane, assistant professor of mathematics. He anticipates completing his doctorate in May at the University of Florida, where he has been an instructor since 2007.

Delta Derenda Pate, assistant professor of nursing. Pate is a staff registered nurse at DCH Regional Medical Center in Tuscaloosa, Alabama, and is completing a doctorate at the University of Alabama.

Joseph A. Pederson, assistant professor of kinesiology. Pederson is completing a doctorate at Texas A & M University, where he has been a graduate teaching assistant this year.

Kendra L. Rigdon, assistant professor of biological and environmental sciences. Rigdon, who earned a doctorate from the University of Alabama at Birmingham, has been an adjunct professor in the Department of Science of American Public University System since 2009.

Mary Anne Sahawneh, assistant professor of biological and environmental sciences. She earned her doctorate at Cornell University and currently serves as an editor at American Journal Experts in Durham, North Carolina.

Timothy Sutton, director of writing and communication arts. Sutton currently is assistant professor at Florida Gulf Coast University and received his doctorate from the University of Miami (Florida).

Steven Wall, assistant professor of curriculum and instruction. Wall expects to receive his doctorate this spring from the University of North Carolina, Chapel Hill. He currently is a teacher at Kerr-Vance Academy in Henderson, North Carolina.

Dale Wilger, assistant professor of chemistry and biochemistry. Wilger is a postdoctorate associate at the University of North Carolina, Chapel Hill, where he earned his doctorate in 2011.

In other action, trustees approved the hiring of PriceWaterhouseCoopers to conduct the annual audit of the university’s financial statements after the close of the fiscal year on June 30.

New bylaws for the Samford Alumni Association were approved. Although an association has existed in some form since the 1870s, there had been no official bylaws approved by trustees, according to W. Randy Pittman, vice president for advancement.

Trustees also approved a resolution of appreciation for outgoing Student Government Association President McDavid Maddox for his service and for “extending the kingdom of God through supporting and extending” the mission of Samford University.

In a series of reports, trustees heard that university administrators anticipate ending the current fiscal year with a positive operating margin. The university’s endowment was valued at $275 million as of March 31, up 2 percent for the first quarter of the year.

R. Phil Kimrey, vice president for student affairs and enrollment management, reported that year-to-date paid deposits for fall 2015 are up with the potential for an overall record enrollment for 2015-16.

The next meeting of the board will be Sept. 3-4 in Birmingham.