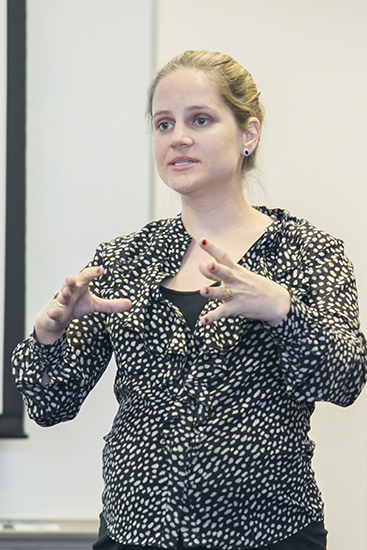 Both the challenges and mistakes of being an entrepreneur in Africa were shared with students of Samford University’s Brock School of Business during an April 14 presentation by Elizabeth Hughes, national award-winning co-founder and CEO of Akilah Institute in Rwanda, Africa.

Hughes moved to Rwanda a few days after graduating from Vanderbilt University in 2006 and two years later, along with her husband Dave, whom she met in Rwanda, developed the idea for Akilah Institute after witnessing the lack of opportunities for young women in higher education, and the disconnect between the education system and employment needs of the private sector.

Hughes said she was deeply inspired by the resilience and reconciliation witnessed in Rwanda since the 1994 genocide, when more than 1 million people were killed in 100 days. “Today,” she said, “Rwandans have a vision of a knowledge-based economy. This future could mean jobs, investment, and poverty alleviation for subsistence farmers.”

The venture was not without its pitfalls and challenges, Hughes told the students. She listed four things, which she called challenges, going into such an endeavor: 1. You can’t build an enterprise on your fantasies; 2. You have to be good at everything; 3. Be focused on issues that you are passionate about; and 4. No matter what, it is a family business.

In retrospect, she shared that her two “biggest mistakes” were letting her heart get in the way of her brain and letting her ego take over.

“All of us in social entrepreneurism need to hold ourselves true to the ethics of our endeavor,” she said. “We must balance our faith with our enterprise and realize it is a life-time commitment. How can I be open to God’s love?”

Hughes said the name Alkilah was chosen because it means wisdom in Swahili.

“To our team Alkilah means confidence in oneself as a leader,” Hughes explained. “Wisdom is the ability to see opportunity, to have the entrepreneurial skills to create and innovate. Wisdom is the conviction to stand up for what is right and make a positive impact in one’s community. Wisdom is the knowledge that Rwanda has a very bright future.”

Hughes noted that the young women at Akilah today are the foundation of that bright future. “We have watched our students grow as they deepen their leadership and public speaking skills, give back to their communities, and take home their first paychecks from their jobs.”

Hughes predicts that by 2020, 1,000 women will have graduated from Akilah Institute in Rwanda and Burundi. Long-term, Hughes acknowledged, the institute aspires to expand throughout East Africa. “The potential impact of this organization is limitless,” Hughes noted.

According to Akilah’s website, Newsweek and The Daily Beast recognized Hughes as one of the 125 Women of Impact. She was also recognized as one of the World’s Most Influential Female Social Entrepreneurs by Forbes magazine. She received the Woman of Peace Award from the Women’s Peace Power Foundation in 2009.

Akilah has been featured in the Wall Street Journal, GOOD Magazine, ABC News, the Council on Foreign Relations, Huffington Post Women, Hope Magazine, the Tampa Bay Times and more. She was selected as a Praxis Fellow in 2014.

Samford is developing several long-term partnerships in Rwanda. During January, business faculty members Jeremy Thornton and Betsy Holloway, along with leaders from Samford’s Mann Center for Ethics and leadership, took a student group to Rwanda as part of a Samford Jan-Term course.