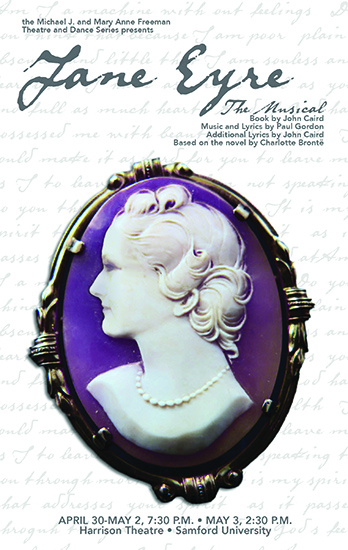 Samford University will present “Jane Eyre” April 30-May 2 in Harrison Theatre as part of the Michael J. and Mary Anne Freeman Theatre and Dance Series. This version of the Charlotte Brontë novel is a musical, with music by pop composer Paul Gordon and lyrics by John Caird.

Performances are at 7:30 p.m. Thursday-Saturday and at 2:30 p.m. on Sunday. Tickets are $12, $6 for students, and can be purchased online or at the Samford Arts box office in Swearingen Hall.

“This production not only meets some of the strengths of our program but was also one of suggestions made by last year’s student selection committee,” said theatre faculty member J. Clayton Winters, the director and choreographer of the production. “It is a newer work with pop stylings and a classical musical approach as well as having many strong female rolls and a solid academic appeal."

“The classic story and its ties to a great work of literature is a definite draw for many. For those unfamiliar with the story they will certainly be gripped by the great love story, the wonderful music and costuming, and the inventive staging utilized to tell the story.”